The Twins Outfield And Its Shape 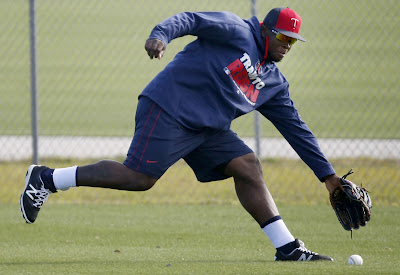 No nearing the end of March, the Minnesota Twins have played the majority of their spring training games. With the outfield being one of the most intriguing positional groupings for Paul Molitor's squad, it has been interesting to grab takeaways from each day's action. As the regular season gets underway though, the outfield may shift somewhat drastically from how it begins on Opening Day.

It was all but locked in from the beginning of Spring Training that Minnesota would go with Eddie Rosario, Byron Buxton, and Miguel Sano in the outfield from left to right. Buxton was never realistically going to lose the centerfield role, Rosario was coming off of a nice rookie year, and Sano was being asked to field as well as hit. What isn't locked in, is just how the group may shift over the course of the year.

Looking back at how Rosario posted the numbers he did, the Puerto Rican appears to be a significant regression candidate in the year ahead. His defensive ability is definitely going to make it hard for the Twins to pull him from the starting lineup, but his bat no doubt could force the decision.

On the other side of the equation, Molitor is dealing with Sano learning an entirely new position. Having made a few misplays this spring, there's no doubt more to come as meaningful games commence. Whether or not the Twins stick with the hulking Dominican or not probably depends on quite a few different factors.

The storylines however led me to this question: 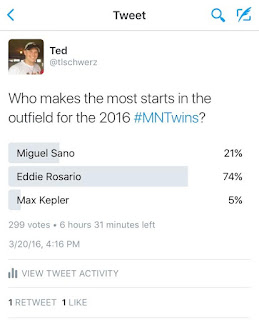 On the surface, it surely doesn't appear that the results of that poll would be too far off base. However, I'm willing to contend that there's some reason to believe things could be flipped. I'd be far from surprised to see the total starts in the outfield at seasons end among those three look like this: Sano, Kepler, Rosario.

Taking a look at Rosario first, I've done plenty of background work on his offensive detractors. His on base percentage has dipped ever since reaching the upper levels of the minors, and his free swinging tendencies are worrisome. In 2015, his OPS was significantly inflated by a major league leading 15 triples, and it's hard to expect that to replicate. In short, expecting the regression on offense to dictate Rosario's playing time is just half of the equation.

The other side of Rosario's dwindling playing time rests in the hands of Max Kepler. The German born prospect has the makings of an All Star at the big league level, and there's a reason he remains a late part of big league camp for the Twins. When healthy, Kepler's ceiling has always been sky high, and his .318/.410/.520 line in 2015 did nothing to discredit that. On both sides of the game, Kepler is a contributor, and there's little reason to believe he can't supplant Rosario on his own merit.

Kepler's time also factors into the equation when taking a look at Sano, who I expect to be better than anticipated. Playing right field for the Twins, his value is almost solely tied to offense, but that's far from an isolated case. Two of the three top American League right fielders in terms of fWAR (Nelson Cruz and Jose Bautista) posted negative DRS (defensive runs saved) numbers in 2015, and have done so throughout their careers. A season ago, Torii Hunter was Minnesota's right fielder tallying a -8 DRS while being worth a measly 0.5 fWAR. For Sano, the new position shouldn't provide enough hiccups to make the thought process make sense.

There's no doubt going to be issues with ball tracking, and occasional gaffes here and there in the new role. What Sano brings is a big arm, and the offensive firepower. Trevor Plouffe being afforded a lineup spot with Sano in right makes the Twins better as an offensive whole. Should Sano post a manageable negative DRS number while continuing to hit, the Twins no doubt did the right thing. Kepler can spell him as needed, but I'd guess Molitor sticks with his big man much more seriously than anticipated.

When the dust all settles, I suppose the results of the poll could no doubt be spot on. Eddie Rosario may again produce despite an approach that doesn't lend itself to doing so. Sano could bomb and Minnesota would have tough decisions to make. Kepler may have to wait his turn, and do so longer than expected. At the end of the day though, I don't see it being that cut and dry.

The situation is set up to be one of the more intriguing storylines of the Twins season, and putting Molitor in a position for guys to earn their role is something Minnesota can be excited about.
Posted by tlschwerz at 7:44 AM