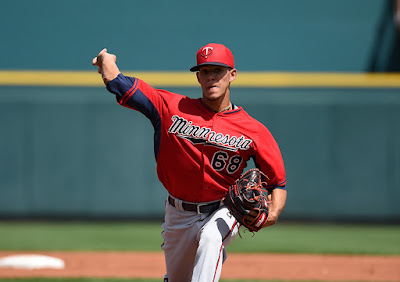 The Minnesota Twins have not been to the Major League Baseball playoffs since 2010. Following the 3-0 series sweep at the hands of the New York Yankees, Minnesota went on an ugly four-season run losing 90 or more games each year. Having begun to turn the corner in 2015 with a near playoff run, the 2016 squad appears poised to end another long drought. This one focuses on the AL Rookie of the Year award.

Marty Cordova was the last Twins player to take home AL Rookie of the Year honors, and he did so following the 1995 season. A 10th round pick by the Twins in the 1989 draft, Cordova earned the award seemingly against all odds. His 1995 season included a .277/.352/.486 slash line with 24 homers, 27 doubles, four triples, and 84 runs batted in. On a terrible Twins team, Cordova was a bright spot.

For the 2016 version of the Twins Rookie of the Year candidates, the narrative should be much different. A team that's going to be in a spot to compete, and a player with some impressive pedigree, it would appear that one of a handful of options could emerge as the front runner. With a pitcher, an infielder, and a couple of outfielders factoring into the equation, Minnesota should have no shortage of suitors.

My favorite to take the title for the Twins won't even begin the season on the big league roster. Berrios has been demoted mainly for service time reasons, but could use the first month to get settled in at the Triple-A level. He dominated Rochester a season ago, and has all the makings of a top-of-the-rotation starter. As I've mentioned before, it's hard not to think of him as capable of replicating what Jacob deGrom did in his rookie season.

For deGrom, the NL Rookie of the Year was capture thanks to a 2.69 ERA and a 9.2 K/9 while issuing just 2.8 walks per nine. That season, deGrome allowed only seven longballs and tallied 140 innings for the Mets. Last season at Triple-A, Berrios improved upon his Double-A Chattanooga numbers. The Puerto Rican posted a 2.62 ERA (owning a ridiculous 1.08 ERA across his final four starts). Starting 12 games at Triple-A, Berrios struck out double-digit batters twice, and nine another two times. Expecting him to make a splash at the big league level seems like a pretty good bet, and he's no doubt my odds on favorite.

Baseball's best prospect saw his flames fanned some after struggling in his first 138 plate appearances in 2015. The flip side of that thought process however is exactly that total, having just 138 plate appearances under his belt. Just 22 years old and still with tools oozing everywhere, this season should be the one that things start to come together.

In short, even without his bat Buxton has the ability to be an above average talent due to his defensive prowess. What should be expected though is for a slow-starter to settle in and eventually contribute in a big way at the highest level. If someone is going to take the Rookie of the Year honor from Berrios, it may well be his own teammate.

It may be somewhat unfair for a 29 year old Korean superstar to be considered a rookie, but here we are. Park is fresh off two straight 50+ homer seasons in Korea, and has acclimated nicely to the big league game. Though it's a small 36 at bat sample size through spring thus far, he's already made some nice adjustments.

After being overmatched and likely overwhelmed in his first spring training game, Park has settled in nicely. He's the owner of a .306/.333/.611 slash line and has knocked three balls out of the park while picking up another two doubles. His 10 strikeouts in 36 at bats aren't ideal, but he will likely push his walk rate higher as his power plays and he becomes more comfortable at the plate. If Park pushes anywhere close to 30 homers for the Twins this season (and I expect him to do so) there's absolutely room for him to be considered for the award.

If there's a long shot in this group, Kepler is no doubt it. That being said, it's also not fair to discredit the realistic probability that he factors into the equation. I'm of the belief that Kepler will get more run that assumed at the big league level this year, and he has the talent to be an All-Star level player.

Healthy after getting a late start to the 2015 season, Kepler went on to pick up Southern League MVP honors. At Double-A Chattanooga, all the German born prospect did was hit. Owning a .322/.416/.531 slash line, he posted 34 doubles, 13 triples, and nine homers while driving in 71. His speed and power combo made him an immediate gap threat, and that will no doubt play well at the expansive Target Field. He's seen an incredible amount of run throughout big league spring training, and it's not at all a mistake.

Kepler's opportunity hinges on the performance of Miguel Sano in right field, along with Eddie Rosario at the plate. If he continues to rake to start 2016, and the Twins need a boost in the outfield, expecting Kepler to be it is a good bet.

It's been an incredibly long time since the Twins have had so much promise amongst their youth. Sano put together a very strong rookie campaign a season ago, but was outdone by the likes of Carlos Correa and Francisco Lindor. In the year ahead, the only players outdoing each other could very well be from the same organization. Cordova is long past due in being overtaken as the last Twins Rookie of the Year, and 2016 is shaping up to be the icing on the cake.
Posted by tlschwerz at 6:46 AM