Nolasco Waiting To Blow Up? 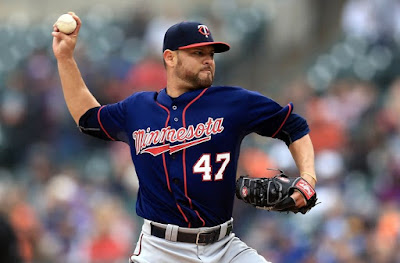 Prior to the 2014 Major League Baseball season, the Minnesota Twins and Terry Ryan realized they had a deficiency. Coming off of yet another 90 loss season, the team's starting pitching was nowhere close to what it needed to be to compete. The answer was to scour the free agent market, and bring in outside help. Ryan landed to fresh arms that offseason, one has worked, and the other one hasn't.

The issue with the one that hasn't; we may not have seen the worst of Ricky Nolasco yet.

In terms of performance, the Twins put themselves in a less than advantageous situation from the get go. Nolasco was largely a middle-of-the-road pitcher in the National League. Despite being considered an ace at times for some relatively poor Marlins teams, he'd pitched to the tune of a sub 4.00 ERA just twice in his first eight seasons (2008, 2013). Nolasco's FIP generally hovered somewhere in the mid three's, and arguably his greatest asset was in being known as an innings eater.

Not a big strikeout guy, owning just a 7.4 K/9 mark, Nolasco was not likely to overpower hitters in the tougher American League. Surrendering just south of 10 hits (9.5/H9) per game, his pitch to contact style was one that Twins fans have come to grow tired of. Despite the many warning signs, it was Nolasco (and not the more realistic Phil Hughes) that commanded a $12.25m average annual value from the Twins over the next four years.

Entering their first season with the Twins, Hughes and Nolasco were the two pitchers brought in to change the rotation. While Hughes had been burned by homers, he was two years Nolasco's junior, and had a projectably higher ceiling. As expected, Hughes succeed (arguably much better than assumed) and Nolasco struggled.

Now with one ugly (5.38 ERA in 27 starts during 2014) season under his belt, and one injury riddled one (just 37.1 IP in 2015), Nolasco finds himself at a crossroads. In his Twins career, he's compiled a 5.64 ERA, 4.15 FIP, while striking out just 6.9 per nine, and offering little to no reliability. Considering the output, the California should be owed nothing, except he is...another $24m over the next two years.

That brings us to where we are now. Without a guaranteed rotation spot, Nolasco enters 2016 on the outside looking in. A less than ideal situation for a starter, Darren Wolfson of 1500 ESPN asked Nolasco's agent (Matt Sosnick) about the situation, and potentially working out of relief. Here's that response:

Ricky has been an effective starter in the big leagues for ten seasons. Last year was an injury filled season, and he certainly deserves to show the Twins what he looks like without trying to pitch through the pain. The Twins evaluate talent very well, and their minor league system is a testament to the time and effort they put into that part of the game. They paid Ricky almost 50M dollars two years ago based on the totality of his work. I won't believe he is not in the rotation until I see it.

If the club believers he is better suited for a relief role, Ricky has made it clear to me that he would directly address his feeling of disappointment to his manager and the GM, and that he would ask the team about his other options.

There's little room to mince words in the statements above. Nolasco is clearly under the impression he's one of the Twins best five starting pitchers, and opposition to that is going to be an issue. This leads us to the reality, things could likely get worse.

With Phil Hughes, Ervin Santana, and Kyle Gibson already rotation locks, there's just two spots left in the starting five. Paul Molitor has all but said Tyler Duffey will get one of them, and Tommy Milone has done nothing to lose his role. Nolasco in relief seems like the most plausible option, but then again, it really doesn't.

A handful of different scenarios have been thrown around as to how to handle Nolasco. In seeing the way in which Mike Pelfrey took a bullpen demotion a season ago, expecting it to go better with Nolasco is probably foolish. The reality though, is that putting Nolasco into the pen, is a square peg going into a round hole; it's a way for the Twins to utilize some of their already sunk cost in his contract. Trading Nolasco also would seem an uphill battle. The return would no doubt be pennies on the dollar, and a guy who's shown very little ability over the past two seasons doesn't have much value.

This leads us to my preferred solution. Nolasco wants to start, and there's little reason to believe he walks away from his hefty paycheck. Minnesota can DFA Ricky, removing him from the 40 man roster as he passes through waivers unclaimed, and allow him to start at Triple-A Rochester. In this scenario, he continues to start, staying stretched out, and can be a fallback option if and when injuries occur at the big league level. No doubt the move would be met with some angst from the Nolasco camp, and he could definitely refuse the assignment (due to having five years of service time). If he's dead set on starting though, and wants to play hardball with Minnesota, Ryan has some options at his disposal.

At the end of the day, Minnesota has a glut of high-ceiling reliever nearly ready for the big league level. Forcing Nolasco to the pen simply to get use out of him, over the roster inclusion of a player such as Alex Meyer, Nick Burdi, J.R. Graham, or some other MLB ready pen commodity would be less than ideal. The hope would be that Ricky Nolasco can turn his performance around, but this situation at least from a personnel standpoint, is likely going to get worse before it gets better.
Posted by tlschwerz at 6:11 AM