Danny Do It All, Santana The Utility Man 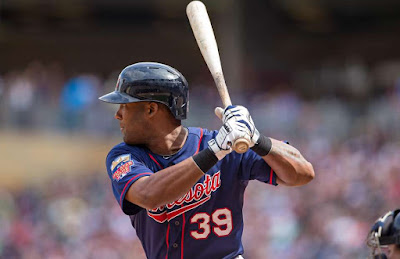 Prior to the 2015 Major League Baseball season, there was no Twins player I was more down on that Danny Santana. After exploding onto the scene in 2014, and garnering some AL Rookie of the Year votes, regression was looking him right in the face. Unsustainable production at the plate caused worry, and the fears turned out to be more than warranted. In 2016, there's a different tune however. Santana could be one of the Twins most integral roster components.

In 2015, Santana produced an ugly .215/.241/.291 slash line for the Twins over 91 games at the big league level. His .405 BABIP from 2014 came crashing back to earth, and even swung heavily the other way, ending at .290 for the 2015 season. Given the starting shortstop role out of the gates, he was unpredictably terrible, and was given a much longer leash than imagined. Summarizing, the 2015 season is one that Santana will want to forget.

Nothing could help him move on quicker though than what is to come in 2016. Santana who has been named to the 25 man roster for the Twins, now finds himself in a different role. Moved back to the outfield in principle, Santana has started games all over the diamond for the Twins through spring training. Having shown the versatility to play on both sides of the infield, as well as spelling uber prospect Byron Buxton in center, Santana will have plenty at bats come his way.

Santana's approach at the plate has always been one that could lead to some struggles. Taking walks has never been a big part of Santana's game, and the 2.2% walk rate at the big league level in 2015 was a new career low. He swung at pitches outside of the zone over 43% of the time last season, and missed on swings nearly 13% of the time. Neither of those numbers are ideal (although they are better than 2016 regression favorite, Eddie Rosario), but a late season surge may have seen things begin to click again.

Prior to his promotion back to the big league club to end the season, Rosario tore up Triple-A Rochester in the month of August. He slashed .333/.352/.506 over his final 20 games there. Posting eight extra base hits, with three homers, the Dominican seemed to find his stroke once again.

Through spring training, Santana has once again continued to impress at the plate. Given 52 at bats, he owns a .327/.339/.462 slash line with a homer, and nine runs driven in. Utilizing his speed on the basepaths, he's also contributed five stolen bases to Paul Molitor and the Twins cause.

Comparing things and projecting forward for Santana, trends should be in his favor. The largest detractor to his assumed regression in 2015 was in the form of the inflated BABIP, largely a metric of luck. Santana owned a 26% hard hit rate a season ago, down just 0.5% from the 2014 season. His line drive rate dipped around 6% but there were still not any glaring abnormalities. What the numbers suggest is that Santana simply regressed to the mean, and the ball didn't bounce his way as often as it did the season before. Fortunately for him, it bounced significantly against his way more often than not, and posting that poor of a BABIP once again in 2016 doesn't seem like a good bet.

So if Santana should be expected to be better at the dish, that means half of his game is already looking to be headed in the right direction. As a utility fielder, the Twins are helping to make sure the rest of it follows suit as well.

As mentioned earlier, Santana was given the starting shortstop gig out of the gate in 2015. Across 570 plus innings, he posted a -15 DRS and -8.0 UZR for Minnesota. For some comparison as to just how bad that is, not a single qualified shortstop posted worse than a -8 DRS in 2015, and that was Jose Reyes who played 996 innings to reach that feat. What the Twins found out is that Santana is not a shortstop, or at least in a full time role.

Moving away from Santana at short, the 16 errors that came with it immediately helps the Twins defensively. It helps Danny too however, considering he's posted at least league average numbers in the outfield. Playing over 500 innings in centerfield for the 2014 Twins, Santana held down the spot, even while being a bit below average when consulting range factors. Making a home in the outfield as a rotational type should allow Santana to settle in defensively. Sparing Eduardo Escobar at short, Brian Dozier at second, or even Trevor Plouffe at third is a way to sprinkle Santana's glove into the infield without relying on him heavily.

For the upcoming version of the Twins, a focus on the 25th man will be more heightened than it has in recent memory. While I'm not suggesting that's Santana, the point is that having capable pieces off the bench is a must for a team looking to make the playoffs. Santana operating in a super utility role could be one of the nicest things afforded to the Twins in quite some time. While he isn't Nick Punto defensively, Danny Santana could round into being at least that value with the mix of the bat, flexibility, and compatibility.

If 2015 was the Twins relying on Santana to take a starting gig and run with it, 2016 will be about Minnesota hoping he can reinvent himself by being Danny-do-everything. Expect a jack of all trades, master of none type approach, and thinking it works out is a pretty good bet.
Posted by tlschwerz at 6:24 AM