Mauer Wreaking Havoc At The Plate 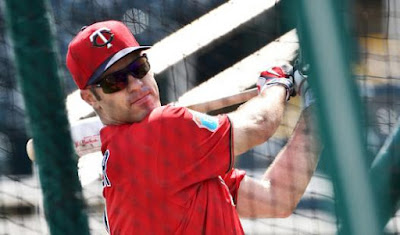 With the Twins getting a big sweep over the Angels, they seem to have righted the ship to a certain extent. At the center of the good fortune (and sorry to Oswaldo Arcia who has contributed two game winners), is poster child Joe Mauer. The St. Paul native seems to be the story to write this week (pieces at Twins Daily and MLB Daily Dish), and for good reason.

Over the course of the spring, Twins beat writer Mike Berardino often noted when Mauer was and wasn't wearing sunglasses. Now further removed from his position-change-forcing concussion, Mauer was experimenting with different alternatives to give him an edge at the plate. Minnesota's first basemen said that he had struggled to see the ball at time during 2015, and that probably didn't help him as he scuffled to a career worst .265 batting average.

Going into this season, I thought that the extra distance from his injuries issues would give Mauer an edge. During my bold predictions piece, I suggested that the Twins hometown hero would hit .300 again on the season. So far, he's trending towards making that look like a cakewalk.

Through the Twins first 12 games, Mauer is slashing an incredible .372/.472/.415. Mauer has had good April's before, but the 2016 season is different, and you don't have to look to deep to find out why. Currently, Mauer's numbers supporting his results are staggering.

In his heyday, Mauer dictated what would happen when he stepped into the batters box, and he's doing that once again. Through the first handful of games for the Twins, Mauer has told pitchers where than can and cannot throw the ball to him, and he's punished them for missing their spots. Still taking a pitch or two when stepping into the box, it's actually been a scenario in which Mauer has lulled the opposing pitcher into giving him the advantage.

To suggest what Mauer is doing is incredible is probably selling it somewhat short.

We are plenty removed from the days that Joe Mauer was Major League Baseball's Most Valuable Player. He's no longer a catcher, and his brain injury has caused his game to change the way he's played. He's never going to be the big bopper first basemen, but what we are seeing in the 2016 Mauer is something Twins fans have long since forgotten the St. Paul native capable of.

It's been three seasons since Mauer has eclipsed the .300 mark. He was last an All Star in 2013, and slashed .324/.404/.476 that year. It was the last in which he spent time playing behind the plate. Now a full time first basemen, Mauer and his sunglasses have put him back into the realm of playing the game he has always been synonymous with.

Credit Mauer for working through the ill effects of his injury and finding a way in which his bat can return to its elite level. His work at first base has also taken significant strides, as he's now above league average defensively at the position. Things are seemingly coming full circle for him, and that's a great thing for the Twins.

It wasn't too long ago that Mauer was on a collision course with the Baseball Hall of Fame in Cooperstown. He's still got a ways to go, and I opined that there's reason to believe he gets there, but hitting for average as a first basemen isn't going to do anything but help his cause. If he can continue his current approach at the plate for the Twins, he'll be the most valuable player to this squad and it won't be remotely close.

Forget the average and the raw numbers, when looking at how Joe Mauer is generating production in 2016, opposing pitchers should be looking straight up a mountain when trying to consider their ensuing battle.
Posted by tlschwerz at 8:33 AM