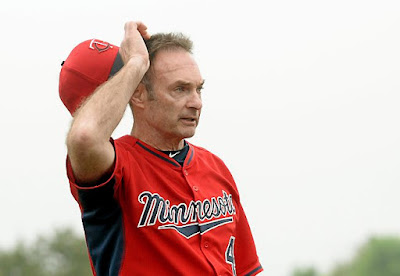 The 2016 Minnesota Twins baseball season is plenty fresh. Just a handful of games in, and the season has produced some already fantastic finishes. For the Twins though, those finishes have come as onlookers around the league, and there's one narrative that's most glaring when looking internally. What do we make of all of the strikeouts?

It was pretty apparent from the get go that this collection of players Paul Molitor and Terry Ryan had assembled were going to strike out. The lineup featured power hitters throughout, but many of them have boom or bust potential. When looking at the sheer number of guys being sent back to the bench however, I couldn't help but dig further.

Earlier this week, I spent a good amount of time digging into the underlying numbers of what was going on at the plate for the Twins. Taking to Twitter (follow along @tlschwerz), I dissected quite a few of the percentages that are popping off the page for the Twins. Just a few games in, it's not worth drawing many conclusions off of the 2016 numbers, but in comparison to what has taken place in the past, there's a slippery slope being stared at here.

As things currently stand, only three teams in the big leagues average more than ten strikeouts per game. The Cardinals top the list at 12.3, the Blue Jays whiff 11.5 times per contest, and the Twins get sent down 11.7 times a game. Of those teams though, there's really only a cause for concern when looking at two of them. With strikeouts should come power, and the Blue Jays have hit home runs 10.9% of the time for each strikeout. On the flip side, both Minnesota (5.7%) and St. Louis (5.4%) lag behind.

Again, the small sample size is far from fair to extrapolate over the course of a full season. That said, and for the sake of understanding, the Twins find themselves in an odd place. A season ago, Molitor's club totaled 1,349 hits while striking out 1,264 times. In 2016, they are on pace for just 1,134 hits and 1,890 strikeouts. In 2015, the Chicago Cubs led all of baseball (by over 100) with 1,518 strikeouts. Looking at the Cubs, they also launched 171 homers a year ago, or a rate of 11.3% per every strikeout.

There's been multiple articles this offseason written about the Twins reaching the 200 home run plateau on the season. It seems like a lofty goal, but one that I can ultimately get behind. Last year, only four teams were able to reach that mark. They consisted of, the Blue Jays (232), Astros (230), Orioles (217), and Yankees (212).

When looking at the teams that hit 200 homers however, they did so economically. Here's each of those clubs home runs per strikeout percentages: Blue Jays (20.2), Yankees (17.3), Astros (16.5), and Orioles (16.4). That tells us that if you're going to push towards that 200 mark, you have to send balls over the fence nearly 15% of the time per strikeout, something the Twins aren't even close to current sniffing.

Right now, the Twins have six players that have struck out more than four times this season. The list includes Byron Buxton (6), Eddie Rosario (6), Brian Dozier (4), Byung Ho Park (4), Trevor Plouffe (4), and Brian Dozier (4). What's interesting is just how they differ at the plate. Take a look at this breakdown:


The numbers above tell us that when striking out, generally Dozier, Plouffe, and Sano work the count to the point of battling, while the other three (Buxton, Rosario, and Park) generally go down more easily. Buxton's numbers can be misleading (obviously, the sample size is small) in that his third game saw him see just seven pitches (after seeing 18 and 23 in his first two games respectively). On the other hands, Rosario's seeing barely over seven pitches per strikeout, combined with the fact he swung at pitches out of the strike zone 46% of the time a season ago, isn't a good look. For the Korean, strikeouts are going to mount until he settles into a more comfortable routine in his new situation.

As a whole, there's a lot to sift through here. In its simplest form, the 2016 Minnesota Twins are striking out incredibly too much right now. They aren't hitting for nearly enough power to outweigh the negative effects, and if the trend doesn't slow, the offense will continue to sputter because of it. It's incredibly realistic to assume the whiff rates even out some, and the Twins will eventually complete nine innings without fanning double-digit times (I think). The problem is that these stretches probably aren't going to be limited to the first few games, and will pop up throughout the year as well.

Baseball has long become enamored with the almighty K, and it's understandable as to why. What the Twins need to focus on, is tipping the box score to include more kangaroos on their opponent's stat line instead of theirs.
Posted by tlschwerz at 6:23 AM