The Curious Case Of Michael Tonkin 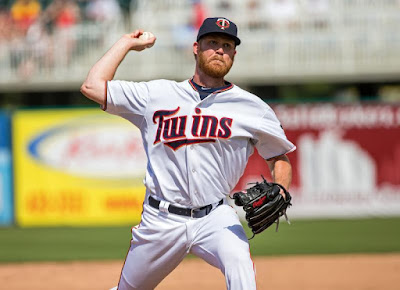 The 2015 Minnesota Twins returned to relevance for the first time since the 2010 Major League Baseball season. After a rocky first few games, a spring run put Paul Molitor's club in a great position down the stretch. Not being eliminated from playoff contention until the final weekend hampered Minnesota from exploring some less entrenched options, but no one was a by-product of that reality more than Michael Tonkin.

Last season, the Twins jumped down a rabbit hole that has now begun to come full circle. Employing the worst bullpen in the big leagues by multiple statistical measures, they left a lot of things unanswered. One of the biggest misses of those "things" was whether or not Michael Tonkin can be effective at the big league level.

A season ago, Tonkin was a 25 year old pitching at Triple-A Rochester. On the season, he posted a 1.10 ERA along with a 10.1 K/9 and walked just 1.1 batters per nine innings. After a 2.80 ERA in 2014 at Triple-A, it appeared pretty apparent that Tonkin was ready for a new challenge.

In "understanding" that, the Twins called upon him. In fact, they did so five different times. During the 2015 season, Tonkin was promoted to Minnesota on five different occasions (meaning he was demoted as well). Of those five promotions, two of them lasted just one game, while a third was played out over the course of four appearances. In total, Tonkin gave the Twins 23.1 IP to the tune of a 3.47 ERA and a 7.3 K/9. Those numbers were all compiled while the Twins learned little to nothing about what they had, and in turn, Tonkin about himself.

Sure, Minnesota was in the midst of a competitive season that saw them narrowly miss the playoffs, but does that really excuse things? Remember, the Twins owned one of the big leagues worst bullpens a season ago. A.J. Achter, Tim Stauffer, and Aaron Thompson were given a combined total of 60.2 IP despite none of them owning better than a 5.00 ERA. Brian Duensing, owner of a 4.25 ERA and a 4.4 K/9 threw 48.2 IP for the 2015 Twins, and Casey Fien pumped a 5.83 K/9 rate during his 63.1 IP. To summarize, Minnesota chose to give struggling and low ceiling options more run than instead to figure out what they may be sitting on.

That leads us to where we are now. Over the course of spring training, Tonkin did everything he could to not make the club. Despite being what seemed to be a roster lock thanks to being out of options, the 26 year old generated a 7.88 ERA across 8.0 IP. The small sample size makes numerical conclusions difficult, but he gave up earned runs in four of his seven appearances, and had as many games result in multi-hit appearances. A team looking to improve upon a bad bullpen wouldn't have carried Tonkin, but the Twins saw their hands tied as they still don't know what they have.

At the break of spring training, ESPN 1500's Derek Wetmore asked me if I believed Tonkin would be claimed on waivers, and if so, I would be ok with it. I answered that I thought there was better than a 50% chance he would be, and that it wouldn't necessarily bother me. From a roster standpoint, the Twins relief options on the farm are some of the best in all of baseball. There's reason to believe that the pen is overhauled and turned into an area of strength. From the notion of how Tonkin was handled however, it would be troubling.

In selecting Ricky Nolasco for the rotation, Minnesota spared Tonkin a roster spot. It absolutely should be Tyler Duffey pitching among the five, and Nolasco in the pen, but in handling things the way they did, the Twins once again put Tonkin in an odd spot. Now on the roster as a carryover, Tonkin is being asked to pitch in a long relief role.

Thus far in his career (60 MLB games) Tonkin has thrown more than 25 pitches just 10 times. Minnesota elected to stretch him out on the Saturday before Opening Day, he threw 53 pitches. In doing so, Tonkin was not available for the rain delayed (per Derek Wetmore and relayed by Curse Of Punto), and didn't make his debut in his new role.

What things have boiled down to with Michael Tonkin is a really unfortunate narrative. A guy that excelled at the highest level of the farm system the past two years was never given an opportunity to produce, is now being included out of necessity, and is being utilized in a less than favorable role. Sure, things could all work out wonderfully, but could there have been a more backwards way of going about it?

I definitely don't think so.
Posted by tlschwerz at 9:29 AM