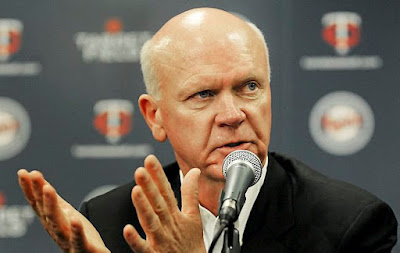 Recently I wrote that the Twins have an absolute slew of problems. They are doing quite a few things poorly, and everything is going negatively all at just about the same time. If we're going to try and attribute things to one place, we're probably running a fool's errand. What is true however, is that Terry Ryan's ineptitude has become more of a focus than ever.

Having taken over for his appointed heir, Bill Smith, Ryan has guided the Twins through some substantial rebuilding. The club had four straight 90 loss seasons, and in turn, drafted some pretty promising prospects. Seemingly close to the top of the mountain once again in 2015, the club just missed the playoffs in Paul Molitor's first year. Now roughly a month into the 2016 season, the head scratching when looking at Terry Ryan's plan has reached an all time high.

Let's be fair here, I have never been one to criticize Ryan. For the better part of his tenure with the Twins, I feel as though he's done a passable job. While you'd no doubt hope for something that pushes the needle a bit further, he's been a guy who is less than deserving of the distaste directed at him. He pulled off a heck of a deal to land Tommy Milone and I still believe that both the Yankees and Twins will benefit from the Aaron Hicks and John Ryan Murphy swap. He moved on from Francisco Liriano when he needed to, and Eduardo Escobar has been more than capable in return.

Outside of a few bright spots over the past few seasons however, Ryan has simply seen the game pass him by.

We can talk at length about whether or not Paul Molitor was a great hire for the manager role of the Twins, but it's far to early to tell how that narrative is going to play out. What we do know, is that Ryan was indebted to former manager Ron Gardenhire to a fault, and while the losing may not have been a result of his direct influence, he did little to change course either.

Coming into the 2016 season, Minnesota made little waves on the open market, and it was expected to be a sign of internal options rising to the top. Now well out of the division race and floundering below the .500 mark, Alex Meyer becomes just the first promotion that we can expect to stay with the big league club (at least as long as he proves capable).

Ryan no doubt had his hand in sending outfielder, and top prospect Max Kepler to the majors. In getting there, he started just two of 17 games, and saw only 14 plate appearances. Whether or not his development was stunted, Kepler saw the early part of his 2016 go to waste. Throw Jorge Polanco in the mix with Kepler, and you have another guy that has now been promoted to the big league level six different times, despite never staying for longer than a four game span. Not expected to have much of a significant impact being more rotational guys to start, the Twins learned next to nothing about either of them while they were up.

A problematic pattern with promotions has followed Ryan for the better part of the past couple seasons. Both Michael Tonkin and Kennys Vargas were mishandled a season ago. One is currently seeing success at for the Twins, while the other is still trying to find the floor after having the rug pulled out from under him.

Then you have what may be considered the breaking point for me. In signing veteran retread David Murphy, the Twins were essentially saying they needed a reason to shake up the roster. Rather than doing so and using a guy like Oswaldo Arcia (who has made his lack of playing time early on look silly), it was Murphy who was supposed to come in and force Minnesota into making a necessary move such as demoting top prospect Byron Buxton.

Murphy went to Triple-A Rochester, and hit .194 like the aged veteran he is. Upon time for his upcoming opt out clause, the Twins first cleared room on their 40 man roster. Catcher John Hicks, who was just claimed from the Mariners this offseason, was jettisoned. Now not only had the Twins lost their third catcher (and a guy with decent future reliability), Murphy made things worse for Minnesota by declining any promotion and chose to retire.

Rather than actually knowing where all parties stood, Ryan and the Twins end up looking silly with egg on their face as the roster handling appears to be above their level of competency. As the dust settled, Minnesota finds themselves now needing to add an otherwise unnecessary player to the 40 man just to fill out their big league bench.

At some point, you have to be ok with asking for more from your leaders. Ryan at his best has been passable if not mediocre. If the Twins are going to take the next step, it's becoming relatively clear that Ryan is probably not the guy capable of pushing the envelope to get them there. Rather than continuing to look internally, and hiring back buddies such as Gardenhire, the Twins best friend could be the one they don't yet know. Ingenuity and innovation generally breeds advancement, but right now that's a foreign concept at Target Field.
Posted by tlschwerz at 8:56 AM