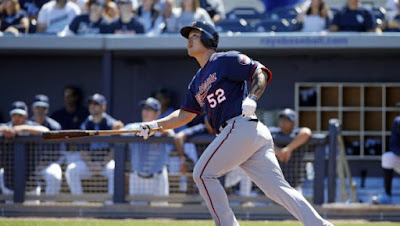 Earlier I wrote about the Minnesota Twins new shift in thinking. After watching the Chicago Cubs and Houston Astros throw strikeout cares to the wind, it appears that's what Paul Molitor and Terry Ryan are deciding to give a go. Utilizing a lineup built with swing and miss hitters, it's going to be boom or bust many nights this season. What we have seen thus far, is way too much of the latter.

Rather than break down everything into much more minute detail, I'd urge you to peruse the linked article above. It goes through the Twins futility in the small sample size provided to us through the first few games. What is worth noting same size aside, it what things may look like over the course of a full season, and what benchmarks there are in regards to actually being successful.

That's where the project I recently completed comes in.

Take a look at the Google Spreadsheet linked below. It's entitled "2016 Twins Strikeout and Power Numbers" but it presents quite a bit more than that.

There's a small bit of analysis on the spreadsheet itself, but what I'll be able to provide you over the season, is a live benchmark as to where the Twins are at in comparison to what is taking place this season, and what has previously turned out to be a plausible strategy. Hopefully, and I'd expect them to, the numbers begin to level off sooner rather than later for what is expected to be a competitive 2016 Twins ball club.

When looking at how the Twins have previously done things, this is uncharted territory. It may work, or it may crash and burn, but at least we'll be able to track it along the way.

I'll leave this piece pinned to the top of my Twitter profile for the duration of the season. If you aren't following me yet, please do so @tlschwerz
Posted by tlschwerz at 6:36 AM