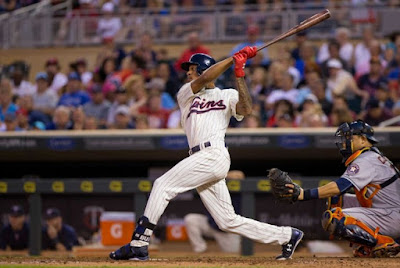 To say the 2016 Major League Baseball season has gotten off to less than an ideal start for the Minnesota Twins is a understatement. Despite the possibility for a handful of losses to be overstated, there's no doubt that the Twins futility isn't a good thing. With an offense that has perfected striking out, and a bullpen that has scuffled early, Paul Molitor may not be too far off from making some changes.

One of the most obvious changes could be in relation to uber prospect Byron Buxton. Having won the starting centerfield job out of spring training, Minnesota was no doubt looking for a better showing than his first taste of big league action. So far that hasn't been the case, as Buxton is batting .182/.182/.273 through his first 22 at bats. What's interesting though is that there's a path in which this narrative has played out before.

Buxton is often mentioned in connection with Angels star Mike Trout. Both had the pedigree of being top prospects, and the hope is that the former turns early big league struggles into long term success like the latter. After struggling in his first taste of MLB action, Trout went on to win the AL Rookie of the Year in his true rookie season. The overlooked part is how Trout progressed over that Rookie of the Year winning campaign.

Unlike Buxton, Trout did not start his first big league season with the Angels. Prior to beginning his record winning journey, he played in 20 Triple-A games. Across that action, Trout slashed .403/.467/.623. He was then called up and went on to hit .182/.250/.227 in his first 22 at bats, a very similar (if not worse) line than Buxton. The biggest discrepancy between how each of them got going is in Buxton's ugly 11/0 K/BB ratio (as opposed to Trout's 5/2 K/BB in his first 22 ABs).

At this point, it's pretty clear that Buxton is working to get his feet wet at the big league level. He's seeing just south of 8 pitches per strikeout and has been scuffling at the plate. To his credit, when he's put the ball in play, he's hit it hard. His at bats haven't been terrible, and they've been visibly better than teammate and outfield partner Eddie Rosario. That said, we may be coming to a crossroads.

Should Buxton continue to struggle to get things going for the next week, decision time may be here. If I'm the Twins, I go ahead and send Buxton back to Triple-A. Getting him down sooner rather than later allows him to get things going, and return in a much more meaningful portion of the season. Allow Buxton, who hit .400/.441/.545 in his first taste of Triple-A, to go grab some confidence and head back to the big leagues in about three weeks.

Should Buxton go down, there will obviously be a ripple effect at the top. The Twins will be short and outfielder and depending on who's called up, the replacement is probably already on the big league roster. Assuming Danny Santana isn't immediately back on his 15th day (which would make the swap for Buxton easier) Molitor should go with Max Kepler. Having been called up, it doesn't serve Kepler to sit and watch. He has the ability to play centerfield, and would then be auditioning for the right to stay up with the Twins. As things stand currently, Kepler should be drawing starts over Rosario, Buxton, and Miguel Sano on a rotating basis, but he could be the guy in center until Buxton returns.

Of course it's not the ideal scenario to have to demote Buxton, what's important though is that it's not a death sentence. For the Twins top prospect, the long term game should be the focus. Getting him right with his bat a level down, will help Minnesota win games at the big league level during the summer months. If Buxton doesn't have a turnaround week, I'd put the plan in action.

The changes probably shouldn't stop with the lineup however. There's also some significant question marks in the bullpen. The trio of Glen Perkins, Kevin Jepsen, and Casey Fien have been unquestionably poor to start the 2016 campaign. If there's a guy feeling the most pressure, it should be the veteran Fien.

Having been gifted a roster spot through an arbitration contract, Fien has turned in a 16.88 ERA with 2 BB in his first 2.2 IP. Getting hit hard, to the tune of seven hits already, Fien has looked extremely ineffective. The most logical move for Fien may be in calling up Alex Meyer.

Yes, Meyer is working out of the Rochester rotation, but it still stands to reason that he makes the Twins this year through the bullpen. He's not ahead of Jose Berrios or Tyler Duffey for starting jobs, and his stuff should play up even better in relief. Taking over for Fien, Meyer can slide into a low-leverage scenario and take his time acclimating to the new level. He was great in his debut outing of 2016, and finished 2015 owning a 0.46 ERA across his final 19.2 IP. There's little room to suggest Meyer would be anything but an upgrade in relief for Minnesota.

As far as the back end of the pen guys, Jepsen and Perkins, a swap is a bit less clear. The former is a major regression candidate for this season, while the latter appears to have fallen off a cliff. Regardless, neither of them is being sent anywhere but the DL should a move be deemed warranted. Perkins has looked ineffective and displayed declining velocity for the last half of 2015, and to start the 2016 campaign. If you're looking for a replacement, J.T. Chargois may hear the call from Double-A Chattanooga.

Chargois has struck out five batters en route to recording his first six outs. He's right there with Nick Burdi in regards to top tier relief talent, and already being on the 40 man roster makes it a smooth transition. Again, getting Chargois up is a tricky maneuver with how you'd need to shuffle some established vets. That said, the relief options are plentiful for Minnesota.

With an early season stumble such as the Twins have had, you'd hate to start making unwarranted wholesale changes. However, you need to do something in order to create a spark, and for a couple different players, a momentary change of scenery could produce benefits throughout the summer. Sure it's unfortunate that Buxton hasn't taken off, or that the pen may have scuffled, but the net result could be the best possible outcome.
Posted by tlschwerz at 6:12 AM