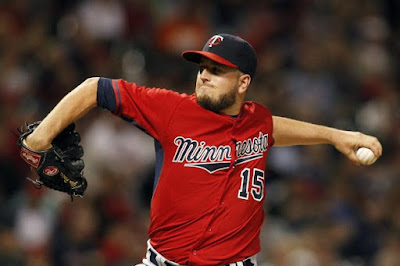 This afternoon, things got worse for the 0-7 Twins as closer Glen Perkins was put on the disabled list due to shoulder issues. With an already questionable bullpen coming into the season, and one that has struggled during it, Perkins removal doesn't help the situation. The bigger problem is that the player continues to be more of a concern than just in regards to injury issues.

On the season, which to be fair is just two appearances, Perkins owns a 9.00 ERA through 2.0 IP. He's given up five hits and blown his only save opportunity. After suggesting all spring that "no one had asked me (Perkins) to open it up," his velocity has been nonexistent. He has topped out this season at 92.7 miles per hour, and is down from a 93.7 mph average a year ago. Back in 2013, Perkins was averaging 95.2 mph on his fastball, and the decline since has been stark.

What's problematic is that this could have all been avoided. Scenario one includes some level of transparency.

As noted above, Perkins has insisted all spring that he's healthier than ever, his workouts this offseason were strength focused, and he was ready for the long haul of the season. Now just two appearances in, the 33 year old is breaking down. His radio appearances and print interviews have fallen by the wayside, and once again, he's got egg on his face.

Nick Nelson of Twins Daily noted on Twitter that we've seen this before. Back in 2009, Perkins suggested all was fine, until it wasn't. The revelation wasn't met in kind from then manager Ron Gardenhire, and rightfully so.

As you may recall, Perkins had shoulder issues in 2009 that caused friction with team. https://t.co/gHYaKEtP3X pic.twitter.com/nupuEdZwRt
— Nick Nelson (@NickNelsonMN) April 13, 2016

Then there's the other part of the equation; what if Perkins wasn't here at all? I wrote a piece over a year ago suggesting that the Twins biggest trade asset was Perkins (check it out here). Minnesota was in the midst of 90 loss campaigns, and having an elite close on a losing team is somewhat unnecessary. Sure, the Twins had recently signed him to a mutually-friendly deal, and he's a Minnesota native, but baseball is a business as well.

The suggestion for dealing Perkins came following the San Diego Padres trading Houston Street. Perkins had posted very similar, if not better, numbers at the time and Los Angeles gave up what seemed like quite a bit. Now with things as they are currently, relying on a strong system of relief prospects and having had the benefit of a nice return from Perkins, it'd be hard to argue the Twins find themselves in a bad spot.

At the end of the day though, we can't change anything with either scenario. Perkins wasn't in the shape he thought he was, and he's still a part of the Twins organization. What can change is how things are handled going forwards however.

It's plenty apparent that Perkins is nowhere close to what he once was, or was even at the beginning of last season. It's time he gets real with himself and understands him limitations. I don't expect him to publicly voice or acknowledge them, but slowing his roll on proposing opposition towards his detractors is also probably a good idea. At some point this season, Perkins will need to be a part of the Twins pen, and getting him to be the most effective includes the reality of him leveling with the organization as to what is actually going on with his body.

Posted by tlschwerz at 9:04 AM