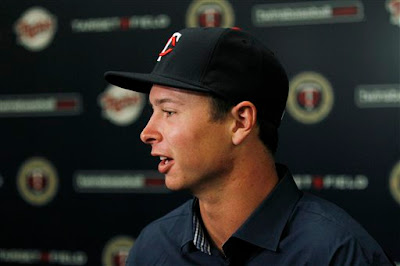 With the 2016 regular season in the books, the Arizona Fall League underway, and the Major League Baseball season barreling towards the World Series, it's time to take a look at what's to come for the Minnesota Twins. The last prospect update here at Off The Baggy was the 2016 Midseason Top 15 (you can find that here).

As 2017 gets underway for the Twins, Derek Falvey will be tasked with getting the organization back on track. A large group of youth has already graduated from prospect status, but it's the young talent that the Twins will have to build their turnaround on. Despite no longer being a top five farm system, there's plenty of talent on the way. With that out of the way, let's get into it.

After being taken in the second round of the 2016 MLB Draft, Rortvedt immediately became the Twins most important catching prospect. He'll take time to develop coming out of high school, but his bat and power are the real deal. He should stick behind the plate, and the expectation is that he'll hit for plenty of power. He got in 33 games between the GCL and Appy League a season ago, and while he's still searching for his first professional homer, the experience was vital. Watching him make strides forward in 2017 should be a lot of fun.

The Aussie starter remains one of the most intriguing arms in the Twins system. He has the stuff to be a capable middle of the rotation arm, but injuries have derailed his development. Still just 20 years old, Thorpe hasn't seen live actions since 2014 with Low-A Cedar Rapids. He was supposed to be back on the mound post Tommy John this year, but never could get healthy. 2016 remains a pivotal campaign for him. When right, he's a top 10 prospect for Minnesota.

I really thought Reed would debut with Minnesota in 2016. Unfortunately a slow start derailed that opportunity, but he did finish strong with a promotion to Triple-A Rochester. He's one of Minnesota's hard throwing relief options, and there's real reason to believe he could push for an early big league opportunity in 2017. Reed has strikeout stuff, and his movement is the real deal.

A third round pick in 2015, Blankenhorn is already at Low-A Cedar Rapids. Just 20 years old and taken out of high school, he really started coming into his own last season. After tearing it up for Elizabethton, Blankenhorn had a solid .774 OPS in 25 games for the Kernels. He's got pop in his bat, and should continue to swing his way up the Twins system.

Like Thorpe, Burdi lost some really significant development time in 2016. He was injured down in Fort Myers during spring training in a fluke accident, and then couldn't get himself healthy enough to pitch with other injuries throughout the year. When he's right, his stuff reaches triple-digits, and penciling him in as a future closer makes a ton of sense. If Burdi can prove he's healthy, and hone in his command a bit, he should join the Twins quickly in 2017.

Speculation and projection remains the key to Javier and his ranking. The Twins spent a boatload on the international free agent out of the Dominican. He's just 17 and played only nine games in the Dominican Summer League during 2016 due to injury. His ceiling is as high as anyone on this list, and if everything breaks right, he could be a star. Javier should be stateside for 2017 and seeing how he does in the lower rookie levels is something to monitor in the year ahead.

Voted by many publications as the Twins minor league hitter of the year, Palka came to the organization in the Chris Herrmann trade. He hits for ridiculous power and was one of the top home run producers in both the Southern and International Leagues this season. He's going to swing and miss plenty, but from a bat perspective, you might not find a better power tool in other organizations.

If there's a prospect I'm more down on than anyone else for the Twins, it's Stewart. After being selected 4th overall in 2013, he's consistently taken steps backwards. A consensus top 40 prospect in all of baseball prior to 2015, he's fallen off of nearly every top 100 list. Stewart is still young at just 22 and already pitching at Double-A. Unfortunately, he has shown very little ability to strike anyone out, his command has progressively gotten worse, and he's now strung together multiple seasons of injury concerns. The upside remains apparent, but Stewart's stock has plummeted. He's got time to turn the tables, and that taking place would be huge.

Creating prospect lists requires players to be evaluated on their own accord. Jorge's ceiling isn't as high as some of the other names on this list, but his floor should also be much more projectable. He looks the part of a mid-to-back-end starter, and he's up to Double-A at 22 years old. Jorge's stuff is never going to overpower hitters, but he doesn't walk anyone, and he limits damage. If he continues his current path, he could be up at Triple-A Rochester by the end of the 2017 season.

Acquired from the Giants in trading Eduardo Nunez, Mejia is about as good of a return as the Twins could have gotten. He's a top 100 prospect according to Baseball Prospectus, and he absolutely should be capable of being a big league starter. His strikeout numbers aren't going to blow anyone away, but he limits damage by not allowing free passes. Coming into the year, Mejia will be one of the first guys called upon to slide into the Twins starting rotation.

21 years old and already mastering High-A Fort Myers, 2016 was an exciting year for Romero. Coming off a missed 2015 due to Tommy John surgery, Romero looked as good as ever. Making 16 starts across Cedar Rapids and Fort Myers, his 1.89 ERA dazzled. He has strikeout stuff, and this season, took a big step forward in limiting walks as well. If Romero flashed what we should expect from him going forward, he's going to be a top of the rotation arm, and could be one of Minnesota's best kept secrets.

Ranking Tyler Jay is somewhat difficult, because the jury is still out on what he becomes. Operating solely as a reliever in college, he transitioned to a starter full time for Minnesota. His numbers were solid at High-A Fort Myers, but he got lit up pitching for Double-A Chattanooga. He has strikeout stuff, but has to scale it back some when starting. 2017 will be big for the former Illinois pitcher as it will likely go a long ways in determining the Twins future plans for him. If Jay ends up being a reliever, he could be a very, very good one. That said, even the most elite reliever isn't something you're hoping for with the 6th overall draft pick.

If there's someone you should be watching in the Arizona Fall League, it's Gordon. He was drafted as a shortstop and expected to stick because of his glove. Thus far, the leather has gotten worse, and it was especially bad in 2016. He made 26 errors for Fort Myers this season, and there's some real doubts now that he sticks at the premium position. The bat has begun to come around, and his .721 OPS was a career best, but the 20 year old will need to continue to grow as a whole if he's going to be an asset up the middle for Minnesota.

This time in 2017, Kirilloff has a chance to be the Twins top prospect, and he could go a long ways to being one of the best in baseball with another strong year. Playing for Elizabethton after getting drafted, Kirilloff's bat just destroyed the lague. He ended with a .794 OPS, but hovered around a .340 average for most of the year. He launched seven homers, and the power, both gap and home run, was as real as it was suggested. He's a bat first prospect, and continuing to hit will be his ticket to advancing. After the initial showing though, betting against him would seem foolish.

After Jose Berrios, Gonsalves has quickly emerged as the Twins most important pitching prospect. Pairing him in the big league rotation with other young arms is a must. He dominated the Florida State League across 11 starts, and then was even better for Double-A Chattanooga. Gonsalves is a lefty with strikeout stuff, and is he can continue to hone is his command, he has a very high ceiling. Just 22 years old, he could get to the big leagues in 2017, and making himself a fixture for plenty of years to come seems like a good bet.
Posted by tlschwerz at 9:11 AM