Are We Safe With Replay? 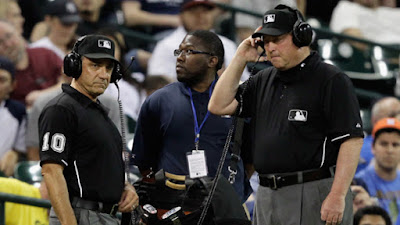 Over the course of the Major League Baseball Postseason, the newly implemented replay system has been on full display. Umpires have gone to the headsets often, and New York has weighed in on some pretty substantial calls. That all being said, it's worth wondering what place replay has in baseball, and if it has a place at all.

Now here's the deal, technology being what it is, we have the capacity to slow live action down and get a closer look at controversial happenings throughout a sporting contest. The problem is that, no matter how many experts weigh in, we still seemingly can't agree. When it comes down to it, replay it sports is being used as a confirmation or denial of an already accepted ruling. The on field umpire or referee has ruled on an outcome, and we go to a slow motion version of that instance to try and deduce the correct outcome.

During game four of the National League Championship Series, a poor Jason Heyward throw to catcher Wilson Contreras made a play at the plate incredibly close with Dodgers runner Adrian Gonzalez. On the field, the home plate umpire called Gonzalez out. He wasn't wrong, but reply indicated he also may not have been right. In seeing Gonzalez slide in seemingly at the same instant as the tag, whether the call had been safe or out, overturning the decision on the field would have been a tough ask.

Looks like Gonzalez's hand is down, but can't make a guess on contact with Contreras' glove #Cubs #Dodgers pic.twitter.com/ptsr9DaZRA
— Ted (@tlschwerz) October 20, 2016

That brings us to what purpose replay should play, and whether or not the current format makes sense. Given the implications of that slide, it's immediately fair to wonder whether or not Gonzalez got in before the tag. We saw throughout the multiple slow motion angles that it was virtually impossible to tell. What we did find out was that there was nothing wrong with taking a moment to look. My stance is that moment must be kept to a minimum.

As things stand currently, one of the longest parts of the replay process is managers standing at the top steps of their respective dugouts deciding whether or not to ask New York for help. At some point, wasting time to zoom in to the molecular level of a play in an already long game is senseless. Home runs, bang-bang calls, and controversial, game-altering plays should be looked at, but why not do so out of habit?

If there's something that takes place on the field of play in which a question arises in regards to the correct outcome, look at it. Forget about waiting on the manager, or the umpire. Have a source in New York take a look, then confirm or overturn the call almost instantaneously. Human error is going to happen, it's part of the game, and you're really only looking to circumvent the egregious mistakes.

Here's exactly why Span was out. Left foot pops off and nothing is touching while Reyes holds tag. #LGM #BeliEVEN pic.twitter.com/tSoBpTS6PO
— Ted (@tlschwerz) October 6, 2016

When Denard Span overslid the base against the Mets, he was deemed out due to his foot popping off of the base. Sure, that's a technical application of the rules, but it's also one that baseball is not better for. Having the ability to garner an out by zooming in, slowing down, and deciphering the game that closely isn't better for anyone. That's the type of replay where the system has begun to fail us.

Major League Baseball has taken significant strides to make things right more often than not on the field, and that's good enough for me. I don't need an electronic strike zone to alleviate the reality that an umpire is an individual and is going to interpret his imaginary box differently than another. I don't want to see play stopped in a tightly contested game for multiple minutes to find out if a sheet of paper could have fit in the separation between player and base. When something is up in the air, look at it, and if there's definitive evidence for it to be overturned, do so.

Replay is instituted better in sports with boundaries. Was the catch made in bounds? Did the player release the ball before the shot clock went off? Baseball has a significant amount of gray area, and slowing down the game to a minute level is never going to change that. Adrian Gonzalez might have been safe, but he was called out, and it's hard to have a problem with that either.

Give me a version of baseball the replay is instituted quickly and sensibly. It's reach has already gone a bit too far, let's scale it back a bit.
Posted by tlschwerz at 7:18 AM