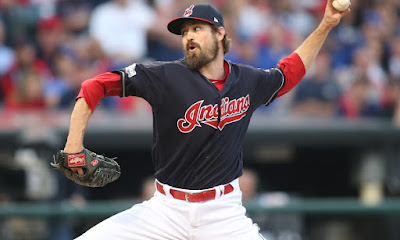 Remember when the Baltimore Orioles were eliminated in the American League Wild Card game by the Toronto Blue Jays? Not only was it heartbreak, but manager Buck Showalter never used closer Zach Britton. The best reliever in the major leagues this season went unused in a game that was never guaranteed to be followed by another. It looked dumb then, and has been the highlighted scenario in the World Series.

You'll often hear of managers failing to go to their closer before the 9th inning, or saving them when on the road. Both the Chicago Cubs Joe Maddon and Cleveland Indians Terry Francona have made a mockery of traditional (and dated) bullpen usage over the course of the World Series.

Throughout the course of the five games, Andrew Miller has been Francona's go to. While not technically the Indians closer, he's easily their best relief pitcher. He's thrown 5.1 IP through the first five games and has struck out eight batters walking just two and giving up just one run. Regardless of it being early or late, Francona has given Miller the ball in the highest leverage situations. Over the course of the playoffs, he's entered as early as the 5th inning, and as late as the 8th.

On the other side of the field, Maddon got on board during game five. Needing to survive to last another game, the Cubs manager went with his rocket throwing closer Aroldis Chapman in the 7th inning. He asked the Cuban Missile to get 8 outs, and even had him bat for himself in the 8th inning. Chapman pitched arguably the most important 2.2 innings of the Cubs season, struck out four, and gave up just one hit. When Chicago needed outs the most, they went to the guy that generally racks them up in bunches.

Now, to be fair, both bullpens have had some suspect usage over the course of the Fall Classic. Francona has generally operated with the belief that both Miller and closer Cody Allen are the only relief arms capable of getting Cleveland outs. With a 6 run lead in game four, and with Corey Kluber rolling, he went to Miller for two innings of work. Despite a six to nothing tally in favor of the Indians at home in game one, Francona went to both Miller and Allen for a combined three innings as well. He's given the Cubs extended and unnecessary looks at both pitchers at times, as well as not having his two best options available in arguably more pressing situations.

For Maddon, it hasn't been so much that there's been bullpen over-reliance as it has been a realization that the Cubs pen is really what it is. Instead of having a Miller and Allen type, the Cubs are pretty much whatever they can get until Chapman can enter a game. Their first relievers most nights have been C.J. Edwards, Mike Montgomery, and Justin Grimm. That group is capable, but far from unhittable.

Aside from the minor disagreements with usage, there's nothing else to surmise from the way both teams have used their relievers in the World Series other than it's something that more teams need to get on board with. Sure, a baseball game ends after the 9th inning, but suggesting that a game is always won or lost at that period of time is quite the goofy suggestion. If you are looking to lock down a big situation earlier in the game, you should absolutely do so.

With statistics being what they are, a closer is always going to look at saves and opportunities as a bargaining chip when it comes time to be paid. While that's absolutely fair, it shouldn't be the only thing that's considered. The Indians had to give up quite the haul for Andrew Miller, and he's been compensated quite well across his career. Yeah, it's nice to increase a save tally for your personal records, but Andrew Miller has just one this entire Postseason, and he's easily been the most important reliever to step foot on the mound.
Posted by tlschwerz at 8:30 AM