The Why's Of World Series Game One 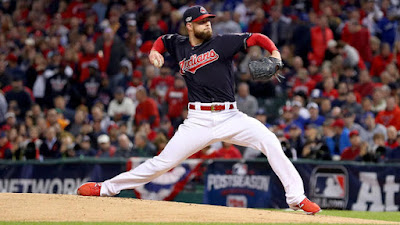 As the World Series kicked off, we've gotten plenty of storylines to monitor. With both the Cleveland Indians and Chicago Cubs coming in as darling teams, it was pretty safe to assume this one would be a lot of fun. The matchup pits arguably the two best managers in baseball, Terry Francona and Joe Maddon, against each other as well. I did find a few decisions confusing from the both of them last night however.

Starting on the losing side, the Cubs decisions came in key offensive situations. Corey Kluber was rolling all night long, and it looked as though he was going to be virtually untouchable. If the Cubs were going to take game one, they needed to get to him for a big run.

The first head scratcher for me was in the top of the 5th inning. The Cubs were already down by three runs, and Kluber had stayed sharp. Leading off the inning for Chicago was Chris Coghlan. Coghlan drew the start in right field over Jason Heyward, the Cubs $184 million dollar man. Sure, Coghlan was better after coming off the DL this summer, and he had a .779 OPS for Chicago in 48 games, but he also owned a .487 OPS for the Athletics this season, and hasn't slugged above .452 since his rookie year in 2009. With bats like Jorge Soler, Willson Contreras, and even Heyward on the bench, I would have used one in that spot.

A big blast changes the momentum (even being a solo shot), and a base hit starts the inning right. Unfortunately, Maddon stuck with Coghlan only to watch him strike out looking for the second time on the night.

Fast forward to the top of the 7th inning, and the Cubs had mounted a threat. Facing the Indians best relief pitcher in Andrew Miller, they loaded the bases and seemingly had him on the ropes. Down three and needing something with two outs, the Cubs allowed David Ross to bat. In 67 games this season, Ross owned a .784 OPS. That was his highest mark since 2010, and with the Cubs needing a hit or walk, his .203 average and .304 OBP over the past two seasons seemed daunting.

Maddon again decided to bypass giving a player like Miguel Montero, Soler, or Heyward the bat. Ross worked a full count but swung and missed through strike three. The Cubs didn't score, and their best chance to get to Miller fell by the wayside.

On the Indians side of things, there wasn't much to question with the offense. They scored six runs and gave up none. Francona's group got things done with their bats against Jon Lester and the Cubs bullpen. It's in the pitching decisions that I found myself scratching my head however.

Despite rolling through the Cubs lineup, Corey Kluber was removed after throwing 88 pitches through six innings. At the time he left, the Indians were up 3-0, and Francona went to Miller. This is where things get dicey for me. Yes, Kluber is going to pitch game four, and likely game seven if Cleveland needs him. He represents their only starting option better than what the Cubs have to offer, limiting his pitch count makes sense. What doesn't is bringing in Miller in that spot.

A three-run lead in the 7th doesn't strike me as something you need your guranteed reliever to hold onto. Francona had Miller throw two innings, and 46 pitches, in a game that should have been well in hand. Bryan Shaw, Ryan Merritt, Dan Otero, or some other arm could've came in and likely completed the same task. Had they found trouble, Miller could've bailed them out.

Now, with Trevor Bauer pitching a rain-threatened game two with a bad pinky, Francona will be without Miller and the Cubs have a significant pitching advantage. Yeah, lock down the game one win when you can, but the World Series requires you win three more, and using Miller there might have punted on game two.

The second pitching decision that was confusing followed the same vein as the Miller option. Francona called on Cody Allen, his closer, to pitch the 9th inning while the Indians were up 6-0. Sure, they've had a layoff and getting Allen used early in the series could help to have him settle in. In game one though, it allowed the Cubs hitters to see the Cleveland closer before they should've been given the opportunity to check out his stuff.

Just one game into this thing, it'll be interesting to see how these decisions trickle down into game two and beyond. If I'm a Cubs fan, game one was an absolute must win for the Indians. Kluber represents the lone starter they can hang their hat on. It's game two that Chicago should be focused in on, and a loss there would be surprising. If the Cubs head back to Wrigley Field with things even at 1-1, they should feel well positioned for a Series victory in five or six games. Should they fall and go down 2-0, that's where pressing begins to happen at the friendly confines.
Posted by tlschwerz at 7:08 AM