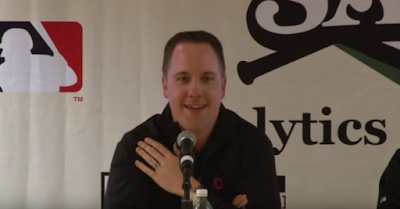 The Major League Baseball Postseason is in full swing and we're quickly approaching what could be a very entertaining World Series. Unfortunately, the Minnesota Twins season has long been over, and any hopes of the Postseason were dashed nearly from the get go. That all being said, Derek Falvey coming in as President of Baseball Operations provides the organization with plenty of opportunity for change.

When you've lost as much as the Twins have of late, there's plenty of areas that require taking a look at how you can improve. If I'm prioritizing what areas may be needing the most attention, this is my laundry list:

Last season, the Twins went into the year asking a young Miguel Sano to go play right field. He's a 250 plus pound man that destroys baseballs and attempts to play third base in between. Asking him to go roam the outfield was always going to be an uphill battle, but it was also put preference on established veterans over the youth movement that this organization is currently undergoing.

Players like Sano, Byron Buxton, Jorge Polanco, Jose Berrios, and a handful of others need to become the backbone of this organization. Getting them ready mentally over the winter is a must. Coming into Spring Training, Minnesota needs to be in a place where the future of the organization is capable of producing, and knowing they will be relied upon to do so.

Leave pitchers on the market

After 2016, it's pretty obvious that the Twins biggest problem remains pitching. They were dead last in virtually every starting pitching category, and they weren't far behind when it came to relievers as well. That's an area they absolutely need to improve, but doing so by signing more pitching is not at all a good plan.

Entering Spring Training, Minnesota has something like eight or nine realistic options for their rotation. While all of them don't have the same ceiling, there's no reason to go spend on a poor free agent class to try and minimally upgrade the group as a whole. Falvey and Co. need to find out what Trevor May looks like back in the rotation, a full year of Berrios is, and even consider Adalberto Mejia. Pushing guys like that further down the pecking order for some retread veterans is silly at best.

Since maybe Johan Santana, the Minnesota Twins have not been presented with such a monumental trade decision. Brian Dozier is coming off the best season in his career, and the best season ever by a Twins second basemen. He was one of the lone bright spots on the club this year, and he may very well be the best player they have for 2017 as well.

If you're going to trade Dozier, you absolutely need to get something substantial in return. I have a hard time believing that the Twins find a partner willing to give them a number one pitcher back. A top prospect is nice, but I think they ask should be even higher than that. The Twins didn't buy into Dozier's free agency years, and he's under contract until his age 31 season (2018). At this point, he may be a late bloomer and that's something the Twins should make sure they're aware of. I don't know that Minnesota is a contender while Dozier is in his prime, but giving him up and not getting something substantial in return isn't a good idea either.

At the end of the 2016 season, the Twins were wrapping up what was nothing short of a terrible year. This collection hadn't done anything of substance all season, and then when presented an opportunity to get youth involved, the front office went with Andrew Albers and Logan Schafer. Adding warm bodies to the 40 man roster absolutely needs to stop.

Coming into 2017, the Twins should have no less than 10 open spots on their 40 man. This team and organization can't turn a corner while continuing to bring questionable big leaguers to Target Field. There's major league ready talent on the farm, and there's more astute non-roster decisions that can be made as well. Stop wasting 40 man spots, it's something that has gone on far too long.

Whether it be new Baseball Ops man Falvey, or whoever he hires as his General Manager, the Twins new front office needs to assert themselves this winter. Make some real decisions on players like Trevor Plouffe, Kennys Vargas, and Michael Tonkin. Minnesota has a handful of players that are out of options or non-tender candidates. If you can get anything for them before simply DFA'ing them, try and do so.

A year ago, Oswaldo Arcia was simply cut by the Twins. He has gone on to be nothing of consequence thus far, but if Minnesota could have gotten any sort of return, and used the roster spot out of the gate elsewhere, they should have. I'm not convinced Vargas is a big leaguer, and it appears Trevor Plouffe is without a spot on this club. Do what you can to move them before cutting bait, and if you do the latter, get it done without turning it into a drug out process.

At this point, expectations for the Minnesota Twins in 2017 should be pretty low. This club is coming off a franchise worst record, and there's going to be more growing pains ahead. The offense should be fine going forward, but reworking the entire organization is going to take some time. Positioning things well over the winter is a good start though, and will only help to get the ball rolling.
Posted by tlschwerz at 9:07 AM