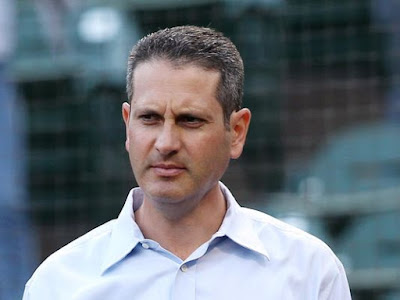 Last night, LaVelle E. Neal of the Star Tribune reported that the Minnesota Twins next General Manager will be none other than Thad Levine. Levin is currently working with the Texas Rangers under Jon Daniels, and he'll assume the role with the Twins under new Chief Baseball Officer Derek Falvey.

As the news broke last night, stories started to filter in about who Thad Levine was. Twins Daily's Cody Christie had Levine tabbed as a potential candidate way back in July, before we even knew of Falvey and the reorganization of the front office. Also hailing from Twins Daily, Parker Hageman found this amazing Reddit "Ask Me Anything" that Levine participated in a couple of years ago.

There's a lot of good information, and you can read the entire thread here, but I pulled some of my favorites.

On what types of things are asked for in big league contracts aside from money:


You would be surprised what some players ask for in negotiations. Or put better, what some agents ask for on their player's behalf. Common things like no trade protection, bonuses for awards or reaching certain performance thresholds. What has become more prevalent is that clubs will ask players to agree to make annual charitable contributions. This is one of the things that inspired us to launch www.meaningfulwins.com, because we found so many players were passionate about giving back and rabid fantasy football players.

For the players from the Pacific Rim, you will oftentimes see requests for interpreters and massage therapists. Some of the most uncommon things that you will find in contracts - flights for family members to join the player on the road, and by far the most curious thing that I ever have seen was one player asked for an annual $250,000 allowance for his wife to spend on her equestrian expenses.

Those sites, and others, have done such a phenomenal job. I believe that is why you see so many clubs hiring their employees. Really the only thing that we have access to that they do not is an extensive database from our scouts. We use those sites extensively in our analysis.

We scour the entire sites, and several others. We are not too proud. If there is cutting edge information out there, we want to know about it.

On social media, Twitter, and the difficulty it presents with breaking news:

You identified one of our biggest challenges. This has impacted us unfortunately quite negatively. Used to be that we could tell all the players involved in trades before it became public. Now, that is extremely difficult to do. Last year, Ian Kinsler found out through the media that he had been traded. We felt awful, but someone called the media literally before we were able to complete a call to Ian.

That being said, at the trade deadline, we are all on twitter, because you may be surprised how many trade discussions are inspired or refined by tweets

On what the discussion points of the next CBA may be:

I believe that the next CBA will be centered around discussions about a World Wide Draft and further means to keep payrolls in check on the high end and competitive on the low end.

On analytics and sabermetrics:


When the book Money Ball came out, front offices were labeled as either analytical or scouting based in their decision making. As a "younger" front office, we used to be younger than we are now, we were considered an analytical group, when in practice, we were much more scouting focused in our decision making. In the past five years, we have made significant investments in analytics both in people and systems.

On long term contracts and big deals like Albert Pujols:

I am not a fan of contracts of that length and total investment, but i certainly understand why teams sign them. Generally speaking when you pitch those types of deals to your owners, you acknowledge that the value is in the first few years, and that you knowingly will have a player who will not live up to his salary in the last few years of the deal.


I think that the goal is to get the calls correct. No on likes the stoppages. Perhaps, we could put a 2 minute time limit on reviews. If the umpires dont see anything conclusive in 2 minutes, then the play on the field stands.

There's no shortage of good information across the entire thread, but Levine was really candid and that's awesome. Having a front office that includes a 33 and 41 year old is quite a bit different from the duo that was Terry Ryan and Rob Antony. If the Twins were to be graded off of the perception gleaned from the two hires they've made at the top this offseason, it'd be hard not to give them an A.

Posted by tlschwerz at 7:55 AM