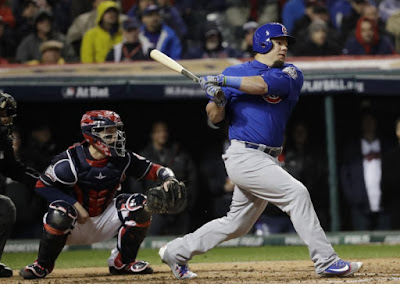 Having not played in a major league baseball game since early April, Kyle Schwarber stepped in against Cleveland Indians starter Corey Kluber. He'd rehabbed, used the cage, and even gotten in time during the Arizona Fall League, but this was the World Series.

In his first game in roughly six months, he ripped a double as he settled in for the Chicago Cubs. It was game two however, that the magic really took center stage. Over the course of what equated to just hit fourth through seventh at bats at the big league level in quite some time, the Indiana product collected two singles while driving in two runs and scoring another. Through the first two games of the 2016 Major League Baseball World Series, it was Kyle Schwarber that had stolen the show.

Now as the series shifts back to the friendly confines of Wrigley Field however, Schwarber will be asked to contribute in a different way. Thus far, he's operated as the Chicago Cubs designated hitter, a position that the National League (unfortunately, in my opinion) doesn't embrace. Back at home, he'll either have to play the field, and test out his surgically repaired knee, or be asked to continue his heroics off of the bench as a pinch hitter.

In Cleveland though, the Cubs displayed the height of what Kyle Schwarber is in the game of baseball.

A year ago, Schwarber debuted with the Cubs and played 21 games behind the plate, 41 in left field, and another four in right field. Total across all of that action, he was worth -5 defensive runs saved. Extrapolated to a 162 game sample size, that's a -12 DRS mark. While there's markedly worse players in the field across the big leagues, it's also a representation of Schwarber's defensive ability, or lack thereof.

So, what happens in the World Series the rest of the way will add to the storyline that's already in place, but the long term future remains clear; Kyle Schwarber is an American League designated hitter. His bat got him to the big leagues, and it'll continue to be the driving force behind who he is.

In 69 games during the 2015 season, Schwarber hit the ball hard nearly 40% of the time. Roughly a quarter of the balls he put in the air went over the fence, His 16 homers equate to a 162 game average of 38, a number that would put him right in the thick of teammates Kris Bryant and Anthony Rizzo. No matter how you look at it, Schwarber's power is real, and his bat will play.

For the Cubs, Schwarber rounds out as one of the most important pieces to their present, as well as their future. He could be, and has been, a key cog on their quest to the first World Series victory since 1908, and in due time, could reward them with a restocked pipeline.

This season, it was Kyle that the Yankees sought in return for Andrew Miller, the Cubs said no, and it looks like that move will pay off. As prospects such as Ian Happ and Eloy Jimenez make their way to the big leagues, Chicago could find themselves needing a big time arm, or another final piece to go for more rings. By parting with Schwarber, they could unlock whatever return they need to make that happen.

There's reason for pause in suggesting that a 23 year old transition to a full time designated hitter role. The Minnesota Twins couldn't bring themselves to do it with Miguel Sano, and it's quite the decision to take the glove off of such a young big leaguer. In certain scenarios though, it works out, and you may end up finding the next David Ortiz.

I have no idea when the Cubs will, or if they will ever, trade Kyle Schwarber. I do know that he was an incredible hitter well before his World Series heroics though, and the performance has only cemented that. His value continues to skyrocket through the roof, and one day, if they so choose, the Cubs will have their pick of virtually anyone they want in return for the guy who made it back.
Posted by tlschwerz at 7:41 AM