All In Or Too Far For Twins 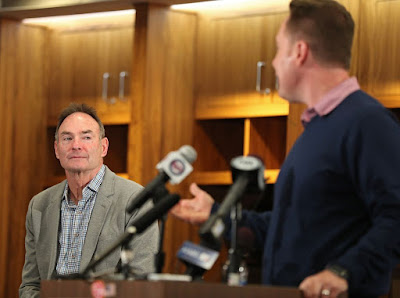 As the Winter Meetings kick off, largely the two biggest bombshells of the offseason have already been dropped. With Shohei Ohtani signing with the Los Angeles Angels, and Giancarlo Stanton being traded (see: given) to the New York Yankees, it'll be hard for agent free agent moves to live up to that billing. For the Minnesota Twins however, a line in the sand has been drawn, and now it's on Derek Falvey and Thad Levine to figure out how they'll toe it.

In 2017, the New York Yankees matched up with the Twins in a winner take all Wild Card matchup. Tied with three other teams for the next spot (and first one out in the American League) was the Los Angeles Angels. Those two clubs have drastically improved themselves virtually overnight, and it doesn't appear that either is done making waves yet. Coming off an 85 win season, it has to be apparent to Minnesota that a similar total isn't going to get it done a year from now.

So, where does that leave the hometown nine? It's an interesting spot to say the least. With a core of Byron Buxton, Miguel Sano, Jose Berrios, Eddie Rosario, and Max Kepler all on the 25 man roster, the bulk of the organization's top prospects that rose together have made it. At this point, that would suggest the window for competitiveness has begun to open, and it's on the Twins to supplement that group, and maximize their opportunity. With the AL Central being in a down state (save the Indians), the path to the postseason could come first and foremost through the division.

The Hot Stove season started slow, but that lukewarm feeling has now began to ramp up into an intense burn. For the Twins, it seems to make sense that they should get involved. Being reactionary to what other clubs have does is hardly a good plan of action, but using it as motivation to execute on a plan that could've already been put in place seems like a good ask. With that in mind, the Twins can either choose to spend on the open market, or leverage long term assets in favor of immediate impact.

On the open market, there's only a handful of true needle movers available. Names like Yu Darvish, Wade Davis, Greg Holland, and Carlos Santana all look like clear upgrades in areas that Minnesota could definitely use. Each of them is going to command a significant chunk of change, and with all free agent contracts, there's a decent bet that the final years of any deal fall short of expectations. However, they'd each pair nicely with a strong core group in the now, and could help to push the water level up to where it needs to be.

Looking at the flip side of the coin, the Twins could look to prey on teams needing to move pieces. The Blue Jays and Rays seem out in the cold when it comes to the AL East, making names like Marcus Stroman and Chris Archer intriguing. The Pirates may be inclined to move Gerrit Cole, and even the Mets may be tempted to make guys like Jacob deGrom or Noah Syndergaard available. None of those assets are going to cost a significant amount of money, but prospect collateral isn't going to come cheaply. While the Twins farm system isn't what it was when the MLB core was among it, there's plenty of names that could be packaged to create an enticing offer.

Unlike other sports, Major League Baseball not only takes a strong active roster, but also a blossoming farm system to remain competitive. It's hardly a good idea to completely fleece your reinforcements in favor of winning immediately. However, if you can find a way to leverage all of your assets to maximize on opportunity for the longest time possible, that would seem to be the most ideal scenario.

As things stand, I'm hardly jumping at one side of the argument or the other. Right now, I hope that both Derek Falvey and Thad Levine get together and find the best course of action to grab what stands in front of them. I'd be all on board with Minnesota spending on Darvish, and I'd be equally supportive of doling out prospects for an Archer type. Whatever path the Twins take, the one that leads to reinforcements, and an enhanced "go get it" message for both the division and a deep postseason run in 2018 and beyond is the one that makes the most sense.
Posted by tlschwerz at 6:47 AM