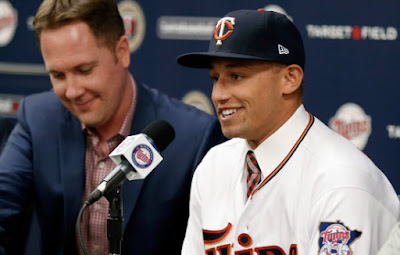 As the Major League Baseball offseason trudges on, and the Winter Meetings soon commence, it's time to take a look at what the Minnesota Twins have on the farm. Over the past few years, the Twins have drafted higher in the draft, allowing them to stockpile talent replacing those who have graduated. Although the current class isn't headlined by a Byron Buxton, it's overall level is impressive.

Here at Off The Baggy, this will now be my third annual Top 15 Twins Prospect list. You can find 2016 here, and 2017 here. Many of those names are now on the big league club, and a few have moved on to other organizations. Prepping us for the season ahead, here's how I see the next wave of future Twins greats.

A 9th round selection in the 2015 MLB Draft, Wade has continued to impress at each stop for the Twins. He ripped off an .805 OPS across 117 games at Double-A Chattanooga this year, and the seven home runs continue to suggest there's a bit of pop in his bat. Wade makes a ton of contact, and has walked more than he's struck out at each level. He may not have an All-Star ceiling, but being a nice rotational outfielder seems like a good bet.

Brought into the organization through the Jaime Garcia deal with the Yankees, Littell provides an immediate boost to a club looking for pitching. He was lights out in the Eastern League, and continued to roll with Chattanooga. His strikeouts and walks both went in suboptimal directions following the trade, but it was a small seven game sample size. He has real strikeout ability, and should be a capable middle-of-the-rotation starter for Minnesota as early as 2018.

If there's an arm on the farm capable of challenging Fernando Romero's velocity, it's probably Greterol's. Just 19, he fared well in both the GCL and Appy League's this past season. With a big velocity fastball, and some solid secondary offerings, he's had no problem mowing down hitters at the lower level. He'll need to hone in command as he works on promotions, but the electric stuff makes him among the most intriguing Twins prospects in the system.

Returning to the mound following Tommy John surgery, Thorpe had a long road to recover. However, he made 16 starts in 2017, and was nothing short of impressive. With Fort Myers, he posted a 2.69 ERA and struck out 9.8 batters per nine. Walks have been a concern both in Cedar Rapids, and in the Florida State League, but an acclimation period is to be expected. If he can settle in to start 2018, he may be less than two years away, and should be a dependable lefty on the bump.

Enlow was taken in the 3rd round of the 2017 MLB Draft, yet has true first round talent. Pitching at 18 right out of high school, he owned a 1.33 ERA across 20.1 IP in the GCL. His advanced command was nice to see, and there wasn't a time that he took the mound where it wasn't can't miss baseball. Although high school pitchers have a rough track record to go against, Enlow has all the makings of a special talent.

After getting to Cedar Rapids a year ago, Blankenhorn spent the entirety of the 2017 season there. His average dropped off some, but the on-base percentage held strong. His .784 OPS was still more than respectable, and following up the 10 homers in 2016 with 13 in 2017 was nice to see. I'm not sure if he'll end up sticking more at second or third going forward, but he's a kid that's continued to come into his own.

Taken 6th overall in the 2015 draft, the road through the minors has been anything but smooth for Jay. Dealing with injuries, and shifting roles, he finally looks on track for the 2018 season. He recorded just 11.2 IP a year ago, but was able to get in 9.2 IP of work during the Arizona Fall League. The new front office hasn't yet ruled out using him as a starter, but I think he's best suited in the pen. He could slot into a future closer role, and the strikeout stuff is definitely there. If he's healthy, I'd imagine Minnesota may be able to call on him midway through 2018.

Thanks to Tommy John surgery, Kirilloff sat out the entirety of the 2017 season. Obviously for a position player, the surgery is much less of an issue. He put up a solid .794 OPS in his debut season with Elizabethton, and should be expected to pick up where he left off. It remains to be seen if Kirilloff can stay in the outfield, but if the bat plays, the Twins will no doubt find a place for it.

The good thing was that Jorge got a test of the big leagues in 2017. The bad thing was how those 7.2 IP went (10.57 ERA). Not to worry, I don't think that's indicative of the young starter's future. Still with just three starts at Triple-A under his belt, Jorge has time for growth. He should start 2018 with Rochester, and as he finds his command there, should make his way back to the Twins rotation. He's more of a pitch-to-contact type, but he keeps the ball in the yard and profiles as a nice back-end starting option.

Looking at how they've started out, I'm not sure it's possible for me to like the top of the 2017 Twins draft class any more than I already do. Rooker is the lone bat of the group, and he's an incredibly good one. After destroying the SEC in his final year, he made both the Appalachian and Florida State Leagues look easy. Minnesota could be aggressive and start him at Double-A in 2018, which I would hope for, and we may even see him in Twins Territory by season's end.

The first of three top five shortstop prospects for the Twins, Javier just continues to gain steam. I walked away from watching him live during spring training in awe, and think he has a chance to be special. Playing his first season stateside, Javier owned an .855 OPS with Elizabethton. As he continues to fill out, there will be more power to come, but he's a true gap hitter with what seems like a decent chance to stick at short.

Creeping towards top-50 prospect status in all of baseball, Gordon had somewhat of a disappointing season. The .749 OPS was a career high, but there's questions as to whether or not he can stick at shortstop. The hope is that either the bat or the glove will pick up significantly and start to point towards what type of big leaguer he may be. At just 22, the Twins still have some time but it would be great to see Gordon have a breakout 2018.

Having arguably the best chance at turning into a potential ace among all Twins pitching prospects, Romero had another solid season in 2017. Making his Double-A debut, he started 23 games and pitched a career high 125.0 innings. His walk rate did spike a bit, but the strikeout numbers held strong. He has upper 90's velocity, and has shown strong pitchability thus far throughout the minors. There's probably an outside chance we see him with the Twins, at least briefly, at some point in 2018.

Cracking Top 100 prospect lists for the first time prior to last season, Gonsalves is finally starting to get some of the national recognition he deserves. The lefty isn't flashy, but he's ridiculously consistent, and he's very good. His 2.68 ERA and 9.9 K/9 followed up a strong 2016 showing, and he made his Triple-A debut this past year. Aside from one start, he excelled at the highest minor league level (3 starts), and his overall command was sharpened a year ago. Expect him to slot in for the Twins at some point in the upcoming campaign.

Selected as the first overall pick in the 2017 draft, Lewis has been exceptional in his brief time as a pro. Making quick work of the GCL, he was promoted to Cedar Rapids for their playoff run. Despite being just 18 years old, he owned a .757 OPS and batted .296 in a league he was over three years younger than the average. He should easily be a top 50 prospect in all of baseball heading into 2018, and there's a case to be made that he is ranked within the top 25-30. We're still a few years away from seeing him with Minnesota, but early indications suggest Lewis is worth the price of admission.
Posted by tlschwerz at 12:57 PM