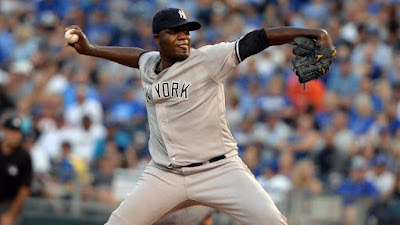 This morning, the Twins started off the Wednesday of the Winter Meetings with an agreement. Former New York Yankees pitcher Michael Pineda, was announced as signing a two-year deal with the club. Before diving into any specifics, Minnesota adding starting pitching is a good thing. Opening up the hood however, that's where this move gets juicy.

Thad Levine and Derek Falvey targeted an injured player with their first major league free agent signing of the offseason. Pineda made 17 starts for the Yankees in 2017 prior to undergoing Tommy John surgery. A best case scenario would put him on track to return late in 2018, but the more likely reality is that he misses all of the upcoming season. Knowing this, the front office got him on a team friendly two-year, $10 million deal. Paying him $2 million in the first year while he rehabs, the Twins will then bump his salary to $8 million in 2019.

Over the past three seasons for the Yankees, Pineda has thrown 432.2 IP and compiled a 4.56 ERA. His 3.82 FIP is a much nicer number, and his 9.5 K/9 would be easily the best mark on the Twins starting staff. He also pounds the zone well, issuing free passes at just a 2.0 BB/9 clip.

For the Twins, building a rotation more capable of missing bats and sitting down hitters, Pineda fits the mold. His fastball sits mid-90s and he pairs it with an upper 80s changeup and a mid 80s slider. Over the course of his career, he's owned a 12.5% swinging strike rate, which checks in around the same level as guys like Yu Darvish. In 2016 with the Yankees, Pineda spiked that number all the way up to 14.1%. He also generates a solid chase rate, getting batters to swing at pitches outside of the zone over one-third of the time.

Although Tommy John still presents a handful of hurdles to overcome, it's a much more routine procedure than it was even five years ago. Expecting some dip across the board is probably fair, but many pitchers return to the same level, if not better, after having the surgery. Paying $2 million in 2018 to have a hands on approach with a pitcher that will be just 30 years old in 2019 is a very good bet.

At the end of the day, a healthy Pineda probably gets something along the lines of Tyler Chatwood's three-year, $38 million deal. Instead of an average annual value north of $12.5 million, the Twins will get a healthy Pineda in 2019 at a modest $8 million mark. This is a creative way to take a gamble with significant upside, and it's the way teams with lower budgets should look to find competitive advantages.

Spending on Pineda does little to the Twins other plans, and it should only enhance Twins fans expectations of what lies ahead. This front office puts its best foot forward once again, and the more times it happens, it never seems to get old.
Posted by tlschwerz at 7:44 AM