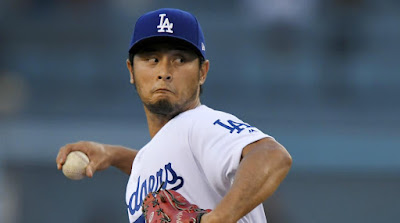 On May 10, 2017 I opined on Twitter that Yu Darvish would look really good in a Minnesota Twins uniform. He was an impending free agent, had ties to half of the new front office, and would be an ace for a team desperately in need of one. From that point on, it was mentioned that was a pipe dream. Now, it may still be, but the reality is many more specifics are being discussed. When it comes to a free agent contract though, how much sense do the dollars actually make?

I have no idea what Darvish or any of the other type free agent starting pitchers will command on an average annual value basis. I'd imagine that each of them is targeting something upwards of $20m per year however. On a six-year deal, you're looking at a sum of at least $120 million at that point. While none of us are billionaires spending our own payroll on this, reality says that in the right situation, those actually doling out the cash shouldn't be afraid either.

When it comes to free agent contracts, and long term deals in general, there's one hard truth to how value is handed down. The reality is that payment is being made for past performance, and it's being granted on a future basis in hopes of projected performance. That's to say, you pay a hefty price for a top tier player's previous accolades, and you do so in length hoping it continues for your organization. The unfortunate other side of the coin is that nothing is guaranteed.

For Twins fast, this reality couldn't be any more prevalent than with Joe Mauer. At the time of his new deal, he was a soon to be 28 year-old with three batting titles, four All Star appearances, three Gold Gloves, and an MVP award under his belt. To be frank, he was on a trajectory to go down as the greatest catcher to ever play the game of baseball. Add in that a mid-market team had the marketability of him being a hometown guy and former number one overall pick to create your perfect storm. That was what the past performance looked like.

Unfortunately for Mauer and the Twins, the projected performance was dealt a huge blow thanks in part to a career altering brain injury. Despite two more All Star appearances, Mauer has been since forced out from behind the plate, and has had to recreate himself as a ballplayer in other ways. It's something neither party could have predicted nor hoped at the time the deal was struck. Bringing things full circle, we arrive yet again at the free agent landscape.

In 2015, Zack Greinke signed a six-year $206m deal with the Arizona Diamondbacks. At 32 years old in 2016, he was mediocre at best and the Diamondbacks finished 4th in the NL West. A season ago, he bounced back nicely and helped to lead Arizona to a NLDS berth. Paired with the talent Arizona had, and the Dodgers seen as their main competition, the Diamondbacks went for it knowing they may get bit in the end. With four years left on his deal, Greinke probably has another season or two of high level production, and then it becomes time to pick up the pieces from there.

Another recent long term deal stays in the NL with the Washington Nationals. Max Scherzer is being paid $210 million over seven years, but the Nets deferred half the money, opting instead to pay him $15 million a year for 14 years. While it's great that Scherzer has been a three-time All Star and two-time Cy Young while with the Nationals, that deal was consummated to maximize a World Series opportunity with the likes of Bryce Harper and Anthony Rendon. The window closes as Bryce likely leaves town prior to 2019, and Washington will then have to decide what's next.

Looking across the landscape of baseball, you can find any number of long term deals failing at the end. The unfortunate side effect of grabbing a proven vet for their last pay day, is that at some point, they'll get old. What should go into the thought process is how that aging and effectiveness bell curve lines up with what an organization currently sees as its future.

Back to the Twins, and really Darvish if we're being hopeful here. Does a six year deal upwards of $125 million strike some fear in the payroll breakdown? Maybe a little, but the factors suggest that it probably shouldn't. Forget about what money Minnesota has coming off the books, and look solely at what a Darvish type would do for the current state of the organization. Only the Cleveland Indians are in a position to be competitive among AL Central foes in the near future, and the Twins have gotten both young and good at the right time. Even if a long term/big money deal flops in the final year or two, maximizing the next four seasons should be something the Twins set out to do.

Four years from now guys like Miguel Sano and Byron Buxton will be nearly 30 years old. They'll be eyeing free agency on their own. Brian Dozier will probably be long gone, and the talk may be of how Royce Lewis fits into the next wave. If adding a gaudy contract best positions Paul Molitor to get a World Series out of his current core, the focus should be on how beneficial that could be in the here and now, as opposed to when it falls apart some years down the road.

Not all free agents are created equal, and rarely do they enter the market young (hence why Manny Machado and Bryce Harper will need a Brinks truck next offseason). Shying away from proven talent in fear of a blowup deal can keep you safe, but rarely is it going to hand you the piece you may need most.
Posted by tlschwerz at 4:45 PM