Emptying Out The Hot Stove Mailbag 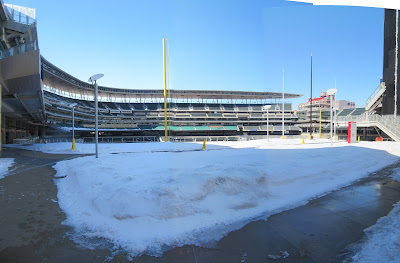 With free agency already underway (despite the lack of movement), it seemed a good time to field some questions regarding the Twins offseason and upcoming year. After a Wild Card appearance a season ago, Thad Levine and Derek Falvey have a team with the arrow pointed straight up. How they handle this winter, and set themselves up for 2018 will be intriguing, and there's plenty more question to explore.

After sourcing questions from followers on Twitter at @tlschwerz, I received a handful of good submissions. Now, let's get into looking at some answers.

Which SP prospects are going to make it on the rotation next year, in your opinion?
— Twins Brasil ⚾🇧🇷 (@TwinsBrasil) November 30, 2017

From the get go, I don't think we'll see any prospects in the rotation. Adalberto Mejia, who's no longer a rookie, will have a shot at rounding out the group however. I'd tab Stephen Gonsalves as the first prospect up, with Fernando Romero following him. We could also see Zack Littell later in the year.

How quickly do you think Otani's skills will translate to the MLB?

Ohtani is so young, and he did strike out plenty in Japan, but I think that league is better than Korea by quite a bit. I'd expect his bat skills to lag behind his pitching, but think they could end up being above average. The arm is going to play, and I expect him to be an impact starter from day one.

Who would you like to see @Twins target for middle relief?
— Neil Kadlec (@neilkadlec1) November 30, 2017

This is somewhat of a trick question, because my ideal answer would be no one. To me, the more back-end relief options you build you bullpen with, the stronger it is as a whole. If a guy is a middle reliever, the ceiling is just lower in my opinion. That said, relievers I'd be interested in are Bryan Shaw, Addison Reed, and Tony Watson. I liked Mike Minor, but the Rangers just grabbed him and are allowing him to start.

Right now, I can't imagine Gibson having any real trade value. Halfway through the season, he was a non-tender candidate for Minnesota this offseason. You have to hope his second half was real, but no other team is giving up anything for him. Santana is dicey going forward as he creeps up in age. That said, even as he regresses, he should remain serviceable. The Twins window is opening right now, and supplementing the rotation with a better number one than Ervin is a must.

Alex Colome going to be our new closer sounds like the Rays are getting close to trading him?
— Brandon Czech (@czech_brandon) November 30, 2017

I'm more of the thought process that believes closers can be developed (see; Kintzler, Brandon or Belisle, Matt). Colome is a nice 9th inning option, and he's not a free agent until 2021; that's not going to be cheap. Sign a free agent to plug into that role instead.

Odds a twins/lookouts middle infielder gets traded this off-season
— Whatever Trevor (@robtodd22) November 29, 2017

I'll say 49%. All offseason, Darren Wolfon has been suggesting he keeps hearing the Twins may be most likely to move on the trade front. It makes some sense as there's better options available currently in organizations. I'm all for moving Nick Gordon, but don't know they he'll command a significant return. Pairing him with a big leaguer or another prospect could get Minnesota something usable however.