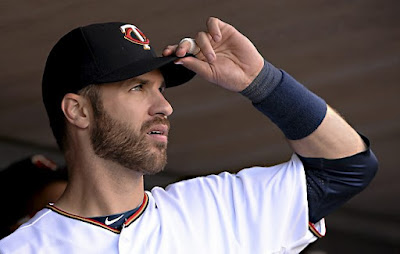 Before each of you busted out the family traditions, started sipping egg nog, and threw on the Yule Log, I gave an opportunity for Off The Baggy to be the giver of a last minute Christmas gift. In sharing your 2016 Minnesota Twins storyline, an entry to win a copy of the 2016 Twins Prospect Handbook was on the table.

After receiving a handful of entries, there were two that stuck out the most. First, all the way from the Cezch Republic, Matt Findlay provided some really great thoughts. Here was his entry:


If I had to pick an individual storyline, I'd focus on Berrios. Steamer has six guys projected to make more starts than Berrios. All of them have ERAs and FIPs over 4.00, and none of them have a k/9 rate over 7. If they are going to take the next step, they need a homegrown frontline starter, and it certainly looks like Meyer and May aren't going slot at the front of a rotation. Hopefully Berrios will at least show flashes that he could be a top of the rotation guy.

I actually think the bigger storyline centers on Terry Ryan. How will the Twins try to improve their chances at winning a series in the near future? We saw the Astros and Royals build excellent farm systems over the past few years, and some of those prospects obviously played key roles for them last year. On the other hand, they both made aggressive deals for veterans (Royals sending Myers and Odorizzi for Shields and Davis, Astros dealing for Gomez and now Giles).
It will be very interesting to see if Ryan is willing to part with minor league players in order to acquire guys that can stamp the Twins as legitimate contenders. It seems like he might want to go the conservative route to avoid losing a future star, but sometimes you need to give up some promising talents in order to fill immediate needs. It will certainly interesting to see how he plays the next couple of years.
Not only do I think Matt hits Berrios being a big contributor right on the head, but his secondary point looms incredibly large. As I've said here at Off The Baggy multiple times this offseason, Minnesota is well positioned to take the next step. Terry Ryan has turned away from making the big move that could elevate the club, and at some point, that may end up hurting him.
Although accumulating prospects is a very nice situation to have, it's about elevating the ceiling at the highest level. Ryan has not followed suit with other up and coming teams in terms of acquiring top tier major league talent. For better or worse, we're about to find out how this ends.

The second winning entry came from Kirby Grutz, who focused on the resurgence of a familiar face. Here's what he had to say:

I believe this season we will see the Joe Mauer of old, the one who was selected to six All-Star Games and hammered his way to five Silver Slugger awards before all of his concussions forced his transition to first base. With the other big sluggers (Park, Sano) throughout the lineup, Mauer won't feel the weight on his back to bring all of the horsepower to the Twins lineup.  Like the days of old, Big Joe's bat will come alive, and we'll see his batting average floating north of .300 once again.
Great things are going to happen in 2016 and our home town man Joe Mauer will be the driving force behind the Twins change in play.
No doubt Kirby sees some serious resurgence from Mauer, a guy who has struggled mightily the past few seasons. While I'm not quite as high on Mauer as the paragraph above, I believe we see his production trend back upwards in 2016. After hitting well in clutch situations a year ago, I think Mauer produces in more skill driven categories in the year ahead.
I won't be surprised if Mauer is able to drive his batting average upwards by being a bit more aggressive. The aggression doesn't need to come from swinging earlier or more often, but instead finding his pitch and comfortably driving it to either the opposite or pull side of the field. In 2015, it felt as though Mauer had too much of a concentrated approach trying to accomplish singular goals (power, pull, etc.). Expecting him to settle back in to a complimentary lineup piece, his plus hitting ability should show once again.
There's no doubt that 2016 is set up as a big year for the Twins. A team that over-achieved a year ago, it's team to substantiate that the performance was real. If either of these storylines play out, Paul Molitor's team should be in a good place.
Posted by tlschwerz at 7:11 AM