How Molitor Handles The Rotation 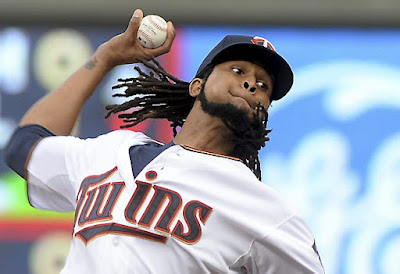 As Christmas is right around the corner, we're still months away from meaningful baseball being played at Target Field. In fact, for the next few months, the field is going to be covered with snow. At this point, projecting a 25 man roster is a losing proposition. For the Twins though, selecting the starting rotation is probably much more feasible.

Sure, there's little doubt that the Twins have some of the most starting pitching depth that they've had in years. With capable arms about eight or nine pitchers deep, the back end of the Minnesota starting five should have plenty of suitors. The question is, how should Paul Molitor set things up come Opening Day?

The first few names in the rotation are easy. Minnesota will almost undoubtedly give "Ace" duties to Ervin Santana. His $55 million contract made him the richest pitcher on the club, and despite the early season suspension, he pitched like one of the best. Although there was some initial growing pains in returning from his suspension, Santana was lights out the rest of the way. From August 30 through the end of the year (seven starts), Santana owned a 1.62 ERA while striking out 8.5 batters per nine. The Twins were 5-2 across those games and Santana tallied a 5-1 record.

Rounding out the guaranteed three is the first of the home grown prospects in this rotation. Kyle Gibson looked the part of the best Twins starting pitcher for stretches of 2015, and another leap forward in the year ahead should be expected. Posting career bests in innings pitched (194.2), ERA (3.84), strikeouts (145), and WHIP (1.289) Gibson continued to grow. His 6.7 K/9 was over a full strikeout worth of improvement, and he was just one of two pitchers (Hughes the other) to win double digit games. Gibson found himself ranking near the top of the AL in ERA for much of the season, and 2016 should see him take another step forward. As a number three, Molitor should feel good about Gibson taking the next step.

Things are somewhat up in the air for the final two spots, but it's Tommy Milone who should be considered the most likely option. Milone was tendered a new contract this offseason by the Twins, and the Sam Fuld trade continues to pay off for Minnesota. Across 23 starts in 2015, Milone owned a 3.92 ERA striking out 6.4 per nine while walking just 2.5 per nine. Milone's numbers across the board registered as his best since 2012 as a 25 year-old with the Washington Nationals. As a back end of the rotation option, Milone provides stability and should have the Twins in position to win plenty of games. If he can continue the lights out dominance he displayed at Triple-A Rochester (0.70 ERA across five starts) in a short stint last year, his major league numbers should continue to trend down.

Most interestingly among the Twins 2016 rotation is the 5th and final starter spot. There's a handful of suitors to be considered including Trevor May, Ricky Nolasco, Taylor Rogers, and Jose Berrios. The most sensible option though is not among those names. Instead, the final rotation spot goes to 2015 rookie, Tyler Duffey.

It was Duffey who started as the Opening Day pitcher for Double-A Chattanooga in 2015. He turned in strong numbers there, as well as Triple-A Rochester prior to making his big league debut. For Minnesota, Duffey made 10 starts owning a sparkling 3.10 ERA. His 3.24 FIP was impressive and he struck out batters at an 8.2 K/9 clip. Going 5-1 in his first 10 big league starts, Duffey should be given the first crack at replicating his stretch run performance for the Twins.

Looking back at the other possibilities to round out the rotation, it's as much that Duffey deserves the role as it is the other options can be beneficial elsewhere. May showed he has the ability to be an asset in relief and could turn into an elite one for a bullpen desperately needing quality arms. Nolasco has been hard to count on, and could be more beneficial in a lesser role. For Rogers, the pen has seemed like a potential destination for a while. As a lefty, he should be a significant upgrade in a long relief role over the likes of a Brian Duensing type.

The biggest name of that final group is no doubt Jose Berrios. At this point, I think it's safe to say the Twins need to give him at least 20 big league starts in 2016, just not from the get go. Service reasons aside, pushing out promising youth in Duffey would be counter productive. If nothing else, Berrios gets his break at the first sign of injury or Milone's ineffectiveness. The goal and hope would be that one he debuts, he sticks for good and shows the same type of numbers he's displayed throughout the farm system.

There you have it, as of December (and barring injury or a blockbuster trade), the Twins are best positioned to go with a Santana, Hughes, Gibson, Milone, Duffey rotation for 2015. After winning 80+ games and starting in a worse place a year ago, that five should be a solid step in the right direction for a team looking to turn the corner for good.
Posted by tlschwerz at 7:30 AM