Who Is This James Shields? 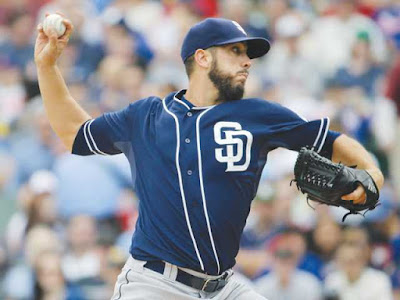 For the better part of the last six months, the biggest pitching name the Minnesota Twins have been linked to is a starter from the San Diego Padres. After inking Phil Hughes, Ricky Nolasco, and Ervin Santana to big contracts, it's James Shields that the club has been tied to recently. Looking to shed the contract of Nolasco in a swap for Shields, one has to question whether Shields is anything more than another bad contract and big name.

Looking at a potential trade during the 2015 deadline period, the Twins and Padres became linked to one another. San Diego is motivated to shed Shields' deal, as the Twins are with Nolasco. Ricky has thrived in the National League, and is a West Coast guy through and through. There seems to be definite reasons for Nolasco to be excited about the idea. What Shields would bring to the Twins should be cautioned however.

While he's known as Big Game James, it's worth noting Shields exorbitant payroll number first. He's owed $21 million in 2016 and can opt out of his deal the following season. If he does not, Shields would be paid $21 million in each 2017 and 2018, with a $16 million team option in 2019 (with a $2 million buyout). That equates to at least $65 million over the next four seasons (when Shields would be 37), with the potential to cost up to $79 million. By that representation, the $24 million Minnesota owes Nolasco over the next two season, seems like peanuts.

So why would the Twins and Terry Ryan believe this deal is of benefit to them?

As things stand currently, Ricky Nolasco has given the Twins just 35 starts over the past two seasons. He pitched in just nine games in 2015, and owns a 5.64 ERA in his time with the Twins. His 4.15 FIP suggests he's been better than that number suggests, but his 6.9 K/9 mark is below his career average, and pitching in the American League hasn't done him any favors. Though Nolasco did have a good stretch before getting injured yet again in 2015, he's been put on the backburner and doesn't appear to have a place in the 2016 rotation.

The interesting wrinkle to any potential trade is that James Shields doesn't seem to be a perfect fit for the Twins rotation either.

That's the bad when it comes to Shields, but there's also some good to be had there. Just a season removed from pitching in the AL Central with the Royals, Shields owned a 3.18 ERA during his time in Kansas City. He struck out batters at a 7.4 K/9 clip and averaged 228 Ip per year. His 2.2 BB/9 mark was lower than his career average, and his 3.53 FIP was much better than what happened in San Diego.

In acquiring Shields, the Twins would need to make decisions on how they would like to attack the 2016 season. First of all, Shields is not exactly a ground ball pitcher. He gave up fly balls on 34% of the balls put in play against him a season ago. With Byron Buxton, Eddie Rosario, and Max Kepler in the outfield that may not be a problem. Having Miguel Sano and Oswaldo Arcia out there could make it catastrophic.

Then there's the issue of rotation construction. Right now, the Twins should go with a starting five of Ervin Santana, Phil Hughes, Kyle Gibson, Tyler Duffey, and Tommy Milone. That leaves Trevor May to be an asset in the bullpen, and Jose Berrios, Taylor Rogers, and Logan Darnell all as depth options. Shields would likely bump Milone from the group, but he isn't a guy that fits in the pen, and he's wasted down on the farm. Ideally, you want quality arms over quantity in depth, but this configuration would put Berrios in an uphill battle to push anyone out barring injury.

As things stand, the Winter Meetings are going to bring more clarity to the situation. Much like the trade deadline rumblings between the Twins and Padres, everything could go up in smoke. If the two teams are willing to swap bad contracts, that's one thing. If San Diego is asking for prospects in return, taking on that salary risk may make it less than worthwhile.

Shields is an upgrade over even a healthy Nolasco, but there's plenty of scary outcomes that lie ahead. If Minnesota loses prospects and Shields walks, it hurts. Should Shields fall off and play out the remaining dollars, that stings as well. Regardless, it's a tread with caution scenario that may have no win in sight.
Posted by tlschwerz at 7:51 AM