Berrios For His First Award? 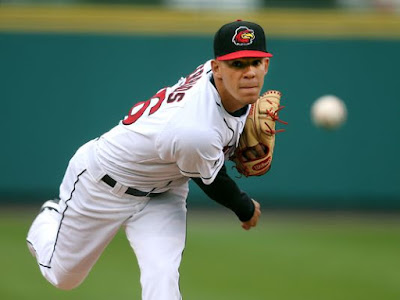 At some point in the 2016 Major League Baseball season, preferably and likely early on, Jose Berrios will make his much anticipated debut. The Twins top pitching prospect had a significant case to be in the fold a season ago, but it's 2016 in which he should be expected to take off. What may not be expected, yet happen anyways, is Berrios taking home an award at the expense of his teammate.

Going into the 2016 season, the Twins may have more American League Rookie of the Year candidates than any other team in the league. You could make a case for each of Byron Buxton, Max Kepler, Byung Ho Park, and Berrios. The pitcher though, may be best positioned to claim the title at the conclusion of the season.

Looking across Major League Baseball to the National League, the framework may have been laid by an exciting New York Mets hurler. In 2014, Jacob deGrom made 22 starts compiling a 2.69 ERA along with a 9.2 K/9 and 2.8 BB/9. The numbers bolstered a campaign that ended with deGrom being dubbed the NL Rookie of the Year.

No doubt deGrom's first season in the big leagues was impressive, but where exactly did it come from? deGrom was a 9th round pick by the Mets and failed to debut on any top 100 prospect lists. In four minor league seasons, deGrom owned a 3.62 ERA along with a 7.4 K/9 and 2.3 BB/9. His 1.284 WHIP was respectable, and keeping the ball in the yard (allowing double-digit homers just once) helped to position him well on the mound.

By all measures though, deGrom took what was what a strong minor league career and turned it into an unbelievable major league start. So where does that leave Berrios?

The Twins top pitching prospect owns superior numbers to deGrom across the board. His four seasons of minor league ball has accounted for a 2.98 ERA, 9.5 K/9, and a 2.5 BB/9 rate. He's compiled just a 1.122 WHIP, and despite evaluators being worry of his home run ball tendency, he's surrendered more than six just once.

Arguably the biggest knock on Berrios is due to his stature. Many prospect evaluators see him as a middle to back-end of the rotation type due to being just 6'0" (at best). Having a lower throwing plane can lead to pitches having less movement and therefore being easier to follow. What is often disregarded however, is that none of the issues tied to Berrios have yet to rear their head.

The long ball has never been an issue for the Puerto Rican hurler (as noted above), and his 175 strikeouts across just 27 starts in 2015 were incredibly impressive. Virtually unhittable at every level of the minor leagues thus far, those continuing to bet against Berrios seem to be doing so against better judgement.

So what does a 2016 Rookie of the Year campaign look like? That's probably somewhat difficult to project. In his title winning campaign, deGrom made 22 starts for the Mets making his big league debut on May 15. Shut down at no point that season, deGrom was able to make his final start of the year on September 21. If there's a reason that the Twins wouldn't afford Berrios 20+ starts at the big league level in the season ahead, I can't seem to come up with it.

Numbers aside, Berrios should be up with the Twins by sometime in May. Looking at the schedule that lies ahead, sometime over the course of either the Orioles (May 9-11) or Blue Jays series (19-22) seems like a plausible timeline. Both line up at Target Field, and would allow Minnesota to miss any arbitration deadlines.

There's no doubt that deGrom's Rookie of the Year campaign set the bar high in terms of output, but Berrios is more the capable of replicating something similar. It was at Triple-A Rochester in 2015 that Berrios improved to a 2.62 ERA (as opposed to a 3.08 Double-A mark). The youngster seems to rise to the occasion and has no fear of each next level of competition. Expecting him to post a sub 3.00 ERA paired with a 9.0+ K/9 rate in his first big league season seems plausible.

Although Berrios will have stiff competition for the award from within his own lockeroom, the limit may only be in how high he is able to push his own ceiling. Twins pitching is looking at getting a boost in 2016 that it hasn't seen in years, and the culmination of it could truly be something special.
Posted by tlschwerz at 8:21 AM