Twins Tender Fien, And It's Not Fine 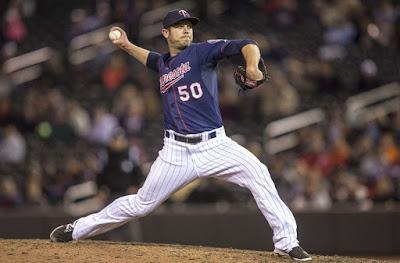 The deadline to tender contracts to arbitration eligible players has come and gone again. This time around, the Twins had six players to decide upon. Four of them were locks for new contracts: Tommy Milone, Kevin Jepsen, Eduardo Escobar, and Trevor Plouffe. Two however, were not. Casey Fien and Eduardo Nunez were both tendered contracts despite having their status somewhat up in the air.

Regarding Nunez, there's not much reason to show displeasure with the decision one way or another. Had he not been tendered, the Twins would have opened a roster spot for someone with a higher ceiling but the potential to struggle when called upon. In bringing Nunez back, Minnesota has a serviceable utility man that can do it all, but not at a relatively high level.

The bigger issue is with the decision to tender a contract to Casey Fien.

We have seen this before with the Twins, and most recently, with Brian Duensing. Duensing was a pitcher on the wrong side of the marginal line that Minnesota continued to go to arbitration with, and make a mainstay in the pen. Over the past two seasons Duensing owned just a 5.0 K/9 while walking batters at a 3.6 BB/9 clip. He owned a 3.76 ERA and while being capable of eating innings, wasn't particularly effective.

Fien is of a similar mold at this point in his career. Although Fien has never walked batters at the clip Duensing has (just a 1.7 BB/9 career number), he doesn't strike out many either. In 2015, Fien sat batters down at just 5.8 K/9 despite being a back end of the pen/high leverage arm. His 3.55 ERA was the best mark since 2012, but the now 32 year old owned a Twins career worst 3.45 FIP (fielding independent pitching).

Coming out of spring training, the Twins bullpen was a point of contention among media members and bloggers. The Twins front office took shots at those stories suggesting that the pen was indeed fine, and built in a way that made sense. As expected, the Twins pen went on to be one of the worst in the big leagues over the past season. The breakdown of Glen Perkins likely prompted the eventual failure to make the playoffs, and once again had the bullpen being a key area for improvement in the year ahead.

Although the Twins have been linked to relievers such as Joakim Soria, their 40 man roster is currently at its capacity. They will need to make a move should they wish to acquire the services of another player. It's not a massive undertaking by any means to do so, but Minnesota could have begun the improvement by trimming some of the proverbial fat in the case of Fien.

It would stand to reason that Minnesota would look to internal options at some point in the year ahead. Both Nick Burdi and Jake Reed seem close to ready on the farm, as well as potential fits such as Taylor Rogers. Regardless, if Minnesota is going to take the next step in the year ahead, continuing down a path of accepting mediocrity isn't a good route.

Neither decision, Nunez or Fien, is incredibly egregious, but they follow a decision making process that doesn't support incremental improvement. Minnesota is entering a phase in which the big league club is ready to win. At this point, they need to get out of their own way.
Posted by tlschwerz at 8:23 AM