What If Sano In The Outfield Works? 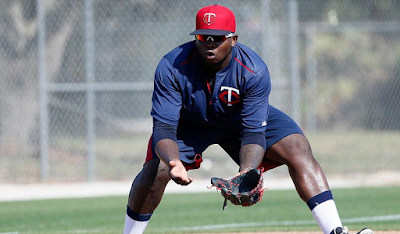 For the next couple of months, Target Field will have plenty of snow in the outfield. When the whether turns warmer and the Twins return home from spring training in sunny Fort Myers, there may be a different Sano in the outfield. Puns aside, what happens when Miguel Sano in right field for the Twins works out wonderfully?

Let's clear a couple of things up here. First and foremost, it appears Trevor Plouffe is not going to be traded. Terry Ryan has been adamant that the Twins don't have nay intentions of moving their third basemen, and after the year he had last year, it's hard to argue with him. I have been a proponent of giving Plouffe an extension, and while that notion has cooled, he's a bat they probably can't replace.

Secondly, there's a distant possibility that the Opening Day outfield for Minnesota could rival some of the worst in major league history. In this scenario, Byron Buxton starts the year at Triple-A Rochester, meaning the three big league spots would be filled by Oswaldo Arcia, Eddie Rosario, and Sano. There's no denying this construction has the makings of a horribly bad defensive unit. Logically though, I think it's a pretty sound bet that Buxton begins the year where he belongs, at the highest level.

Now that we have some parameters set, it's time to get into it.

The outfield utilized most often by the Twins a season ago featured Torii Hunter in right field. For everything he was as a veteran leader and statue of nostalgia, he was virtually that in the outfield, a statue. Hunter gave the Twins a -8 DRS (defensive runs saved) mark, as well as contributing just a 0.3 UZR (ultimate zone rating).

Providing some background understanding when it comes to UZR, here is how it breaks down. UZR is essentially how outfielders are quantified from a complete defensive value. Calculated by looking at how many runs are saved by an outfielder's arm, turning double plays, someone's range, and how many errors are committed in relation to league average, it's quite a comprehensive number. Looking at Hunter's mark, he was essentially a wash when it came to overall value.

Knowing that Plouffe staying at third gives the Twins a positive outcome when considering replacements, it's time to look at the expectations for Sano and his new role. As things stand right now, it appears Ryan and Molitor are split on where Sano would best be suited. Molitor has noted that Sano may be best fit in left, as he sees the ball off the bat in that situation at third. Ryan however, thinks that the ground needing to be covered in left would be best suited for the likes of a more natural outfielder, meaning Sano would be destined for right.

Regardless of which position he plays, Sano has a few things going for him. Last season, had the Twins gone with Eddie Rosario, Byron Buxton, and Torii Hunter for the entirety of the season, their DRS total would have been something like 26. That mark would have been good enough for the 5th best outfield in the big leagues (trailing just Tampa Bay, Arizona, the Royals, and Mets). Also, Hunter didn't set the bar incredibly high.

There's little doubt that on the field, Hunter's presence was most felt in the batters box. Despite the mass amount of times he's going to strike out, there's little reason to believe Sano won't be a superior hitter to the 2015 version of Torii Hunter in nearly every way. Defensively, Sano possesses better speed and quickness, while owning a significantly superior arm.

That brings us to what Sano's biggest deficiency is going to be. After having played infield for the entirety of his career, the Twins are asking a hulking 260 pound 22 year-old to play a position completely foreign to him. The outfield is far more than just getting under pop flies, and while learning the best routes to balls is a feat all its own, there's also understanding situations, cutoffs, and each stadium's quirks. Looking at what lies ahead of him, it's the instinctual part of the game that will provide the biggest challenge.

At the end of the day, Miguel Sano in the outfield for the Twins is quite the proposition. It's a scary one to say the least, and one that Byron Buxton not being to his side gets worse. The silver lining though is that it could actually work, and if it does, the Twins are much better positioned than they are if they move Trevor Plouffe simply to accommodate having too many pieces.
Posted by tlschwerz at 10:10 AM