A Resurging Twin Makes The Difference 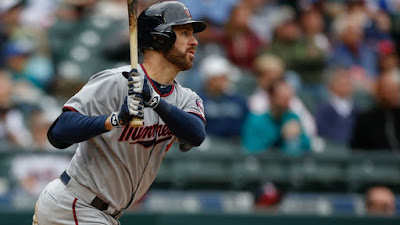 Going into the offseason, the Twins had laid the groundwork for a competitive team in 2016. They had their deficiencies, namely the bullpen, that needed to be addressed. For the most part however, the organization had internal pieces that could be expected to be counted upon in the year ahead. After bringing in a power bat in the form of Byung Ho Park, the lineup seemed to be in a good place.

What could elevate it even further though, is the resurgence of a once counted upon offensive member.

The most damning statistic for the Twins in the year ahead has to do with repeating a non-repeatable statistic. Despite finishing the season 83-79, Minnesota used clutch situations to their advantage at a very high rate. Looking at FanGraphs, there's two very alarming statistics when it comes to the 2015 Twins. The team owned a +10 in BaseRuns and trailed only the Royals (5.05) in the clutch category, with a mark of 3.81.

First, BaseRuns is a comprehensive team metric that evaluates all of the plays a team was involved in. With the Twins being ten over the average, they performed above the expected result at a very high rate. At the same time, the Twins were also exceptional in clutch situations. With zero being a baseline, many players find themselves somewhere between -1 and 1. FanGraphs equates a player below -1 in clutch situations as poor, and anything above 2.0 as being excellent. While not singling anyone out, the Twins as a whole were a 3.81.

What these two metrics tell us is that Minnesota experience a very high rate of success in categories that are hardly possible to be consistently replicated. If a player was to try harder or play better in high-leverage situations, the argument would have to be made that they were not doing the same in lower-leverage situations, a silly proposition.

This brings us to a player on the Twins that can be considered the gold-standard when it came to clutch performances a season ago. Joe Mauer.

So what does this tell us? Understandably so, Mauer was a better hitter with runners on bases. Forcing opposing pitchers to be careful to limit damage and not go directly after Mauer, Joe was able to take a more calculated approach at the plate. This led to an increased output, and allowed a very professional hitter to exploit his opponents. When it comes to Mauer's approach in 2015, there's also some interesting developments.

Minnesota noted a desire to have Mauer pull the ball more. Hitting coach Tom Brunansky was working with Mauer to yank the ball with power, rather than his more typical ground balls to the right side of the infield. As a whole, Mauer pulled the ball 30.5% of the time, his highest career mark since 2012 (32.1%). This in turn led to one of his lowest opposite field hitting seasons, going the other way just 32.1% of the time. On top of the difference in his spray chart, Mauer's level of contact was somewhat odd.

So, where do we go from here? Well, that's up to Paul Molitor. With Byung Ho Park and Miguel Sano now set to be regulars in the Twins lineup, Minnesota has their three and four hitters set. Putting Trevor Plouffe in that mix as well, the five hole is probably spoken for. That leaves Brian Dozier and Byron Buxton in position to compete for the top two lineup spots, giving Mauer the positioning he looks destined to succeed in, the six hole.

In his career, Mauer has batted sixth just five times (starting just one of those games). He owns two doubles in four at-bats, a negligible sample size. What's important though, is just how good Mauer is with men on base. Over the past two seasons, the Twins first basemen has slashed .303/.418/.418 with runners on base. In those at-bats, he's also owned an 86/89 strikeout to walk ratio. Thanks to the likelihood of baserunners batting from the six hole, Mauer's production should be assumed to be the best since 20134, the last time he was an All Star.

Steamer projections have Mauer getting 610 plate appearances across 136 games in 2016. They suggest he'll turn that into a .274/.355/.390 average with 30 doubles, nine homers, and 61 runs batted in. The strikeout to walk ratio is also projected to remain similar at 108/67. Should Molitor attempt to squeeze Mauer somewhere in his top five, I could see those numbers being very accurate. The disagreement comes from the hope that Molitor makes the sensible change.

Batting Mauer sixth in an improved lineup should yield much more positive results. I'd guess Mauer plays more than 136 games in the year ahead, but regardless, his line in the new batting spot should look something like .290/.397/.400. The doubles production should remain right around 30, with the home runs checking in just shy of the double digit mark. Expect another uptick in runs batted in, which would give the Twins a producer in the bottom half.

While some veterans may take a lineup adjustment as a demotion, Mauer should see it as an opportunity. Returning more closely towards the production his career was once synonymous with seems most plausible in this scenario, and that's something Mauer would be on board with. Minnesota will experience some regression from hitters in the year ahead, but don't be shocked when it's Mauer going the other way, being the definition of resurgence.
Posted by tlschwerz at 8:51 AM