What May The Best Option Be? 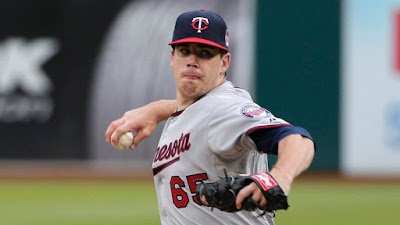 The Minnesota Twins had one of the worst bullpens in the big leagues a season ago. While their starting pitching wasn't anything to write home about, they had plenty of arms to kick off games. With Trevor May entering 2016 with a certain level of uncertainty to his role, it becomes a question of how he best helps the Twins.

Thus far during the offseason, Paul Molitor has noted that he's going into Spring Training under the impression he'll use May as a reliever. Although May was brought in as a starter, he flashed the ability to be a very good, if not great bullpen option in 2015. He was a capable starter, and one of the Twins best at times, but again it's the bullpen that needs help.

There is only two ways in which Trevor May's situation can play out. Either he works as a starter for the Twins or he doesn't. At this point, it's probably worth considering what each of those scenarios look like.

Laying the groundwork, here is how the Twins rotation will almost certainly start:
Those three are all but guaranteed, even if Santana and Hughes flip. From there, the 4th or 5th spot will likely be given to Tyler Duffey. Now how does that make things look with May in the pen? Something like this:
Considering the Twins will go with seven relievers to start the season, we can begin to assumptively fill out the bullpen as well. Glen Perkins and Kevin Jepsen are locks. Casey Fien was tendered a new contract as can be considered in. Ricky Nolasco needs a spot, and that probably comes in relief. Minnesota has to go with Alex Meyer at some point, and him breaking out this year is a very real possibility. Claiming the lefty relief role vacated by Brian Duensing will be someone along the lines of Logan Darnell, Fernando Abad, or another free agent type. That leaves one opening, given to Trevor May.

If May starts in the rotation, he would likely bump Milone from the starting five. Milone's stuff doesn't play in the pen as he is a soft tossing lefty. With May in the rotation, the seventh and final relief role likely goes to someone along the lines of a Michael Tonkin or Ryan Pressly type.

So, that presents us with our crossroads. Let's take a closer look at the center of both scenarios. Here's Option A:

Milone owns a career 3.97 ERA as a starter. His 6.5 K/9 is pedestrian, but his 2.2 career BB/9 helps him to limit damage. In his first full season with the Twins, Milone owned a 3.92 ERA and a 4.30 FIP. He had a dominating stint at Triple-A, and then finished the year with the big league club owning mediocre, but respectable, numbers for a number five starter. Operating at the back end of the rotation would also make Milone the likely candidate to be bumped when phenom Jose Berrios is given his chance.

Here is Option B:

Trevor May was acquired from the Philadelphia Phillies in exchange for Ben Revere. While it was only Vance Worley that was major league ready, it was May that was seen as the premier starting pitcher in the return. May's debut in 2014 didn't go as planned, and saw the Washington native make nine starts with an ERA over 7.00. 2015 was a different story, as May made significant improvement. In 15 starts, he owned a 4.37 ERA and allowed opposing hitters to slash .286/.325/.429 off of him while striking out 8.0 per nine. His best stretch came from May 16 through June 20, seeing May turn in a 3.09 ERA across seven starts. Far from top of the rotation stuff, it was a step in the right direction.

Filling out the bullpen in this scenario is someone along the lines of Michael Tonkin or Ryan Pressly. Tonkin was moved between levels nine times in 2015. In the big leagues, he owned a 3.47 ERA across 23.1 IP. It wasn't quite the 2.80 and 1.10 ERA he flashed at Triple-A in 2014 and 15, but it wasn't bad either. His 7.3 K/9 was serviceable, especially for a pen that didn't strike many out. Pressly, the Twins former Rule 5 pick, owned a 2.93 ERA across 27.2 IP before hitting the DL for the remained of the year. His 7.2 K/9 was a career his by nearly two strikeouts per inning, but his 3.9 BB/9 was a career worst. Coming back from an arm injury, he should be 100% but will have to establish himself once again.

For Minnesota, the goal is to no doubt field the most competitive roster. In doing so, Paul Molitor would be trying to raise the floor for the worst case scenario in each of his positional groupings. While helping to raise the strength of the bullpen, he would also need to make sure the rotation is in a good spot to compete.

While Trevor May is a better starting pitcher than Tommy Milone, and no doubt has more upside, his inclusion in the bullpen also makes the Twins better as a whole. The cost of removing May from the pen would arguably be felt more than that of having Milone start, and eventually be replaced by Berrios.

For now, it's fair to say getting behind moving a young (or relatively, May is 26) starter to the bullpen hurts. In the end though, it could definitely be the scenario that helps to push the ability of the Twins roster as a whole to the best place.
Posted by tlschwerz at 5:52 AM