The Next Massive Twins Deal 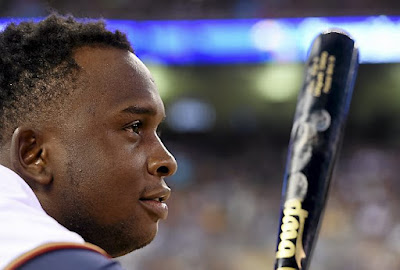 Well, the Winter Meetings have come and gone with Terry Ryan and the Twins going home empty handed. It wasn't unexpected, albeit a bit frustrating. Regardless, a lot of money was spent the past few days and it got me to thinking. I'm on record saying that Bryce Harper is going to get a $500 million contract. Then it got me to wondering, who's in line for the next Twins payday, and how big will it be?

Let's address the elephant in the room first. Yes, the Twins paid Joe Mauer $184 million for eight years of his talents. Yes they were absolutely right in doing so. No, Mauer is not the same player he was, and unfortunately, the value was sapped significantly when Mauer was forced to move from behind the plate. Yes, moving Mauer from catching was the correct and sensible move. No he will never and should never catch again. No, the Twins aren't hamstrung by that contract. No, payroll does not come from attendance or new stadiums, it comes from lucrative TV deals (something the Twins don't have). Yes, Minnesota can afford to spend in the future.

Ok, deep breath, I think we covered all of the points of contention there. So now who's next in line for a big cash dump? Let's think a ways ahead here. He's not a free agent until 2022, and he won't even hit arbitration until 2019, but Miguel Sano is going to get paid.

To make this exercise a bit more simple for ourselves, let's assume that the Twins don't extend Sano early (though they should look into doing so). By the time Sano hit's free agency in 2022, he will be 29 years old. He'll have played in the big leagues for seven seasons, and likely be established as one of the best power hitters in all of baseball.

In looking at what kind of player the Twins may be signing at the age of 29, we need to take into consideration what some of Sano's numbers may look like at that point. In his first 80 games at the major league level, Sano launched 18 homers and drove in 52 runs. On a 162 game basis, that's 36 long balls and 105 runs batted in. Six seasons of that type of production, plus his 2015 performance would have Sano somewhere around 230 homers and 680 runs batted in. Factor in the consideration Sano can be relied upon for 20 plus doubles a year, and an OPS north of .800 and you have a legitimate top five or ten power guy.

By means of providing a complete assessment of talent, Sano's fWAR should be considered. In just 80 games during 2015, Sano gave the Twins 2.0 fWAR (a 4.05 mark across 162 games). That number would have been 20th best in the AL in 2015. Also, considering Sano added no value by playing the field, it's an even more impressive mark.

Looking at some of the massive contracts given out to power hitters lately, we can try to pencil in a thought process for Sano. At the age of 25, Giancarlo Stanton signed a 13-year, $325 million deal with the Marlins. Averaging 4.15 fWAR thus far in his career, Stanton cashed in. Harper is a few years from free agency, but as mentioned, is likely to get $500 million. He'll be 26, and has averaged 4.85 fWAR thus far in his career. Both of those players are in a tier above Sano, especially considering their defensive value.

Trying to find something more comparable, we should probably look a bit higher up the age scale. In fact, we may not need to look any further than this year's free agent class. Enter Chris Davis. The Orioles slugger is on the market at the age of 29 (turning 30 in March). At the moment, Davis has launched 203 homers and driven in 549 runs. He's recorded 168 doubles and owns an .835 career OPS. Essentially, Davis is everything the Twins would hope Sano could be.

With that in mind, the talk is that Davis is being floated contracts in the $150 million range. His strikeouts are a problem, but he's shown some positional flexibility playing in the outfield as well as first and third base (sound familiar?).

It would seem possible, accounting for inflation, that the Twins offer Sano a seven-year, $170 million contract at the age of 29. The average annual value would check in at $24.3 million (just above Mauer's $23m AAV). Should he exceed his current production, or the market dictate it, I could see the price going up to somewhere around $190-200 million as well. Minnesota would have their superstar locked down until his age 36 season, and would spare itself from the scary cliff that is the years closing in on 40.

Right now, Miguel Sano is working on losing some weight and getting used to the outfield. Should things go smoothly for both him and the Twins over the next several seasons, this interesting little exercise could absolutely be the future that awaits the exciting Dominican slugger. Only time will tell.
Posted by tlschwerz at 8:55 AM