Twins Knock Bargain Out Of Park 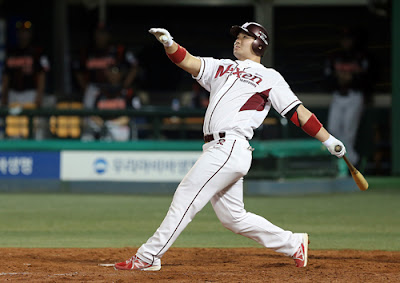 It's official, the Minnesota Twins have come to terms with the star of the Korean Baseball Organization, Byung Ho Park. After recently arriving in Minnesota, and dropping the hyphenation in his name, Park signed a four-year, $12 million deal with the Twins. The deal also includes a club option fifth-year for 2020 that would cost the Twins $6.5 million.

After winning the posting bid just a few weeks ago, the Twins had until December 8th to come to an agreement with Park. While he was playing with team Korea in the Premier 12, reaching a deal seemed unlikely. Following the Thanksgiving weekend, Park traveled to Minnesota arriving late Sunday night. After being in town for just over a day, the deal was done.

Park's projected average annual value looked to be somewhere in the $5-10 million range. Considering that Park was viewed as an elite KBO talent, and the Twins won a very close posting race, Major League Baseball was ready for his services. Following Jung Ho Kang of the Pirates, Park looked to expand upon the third place NL Rookie of the Year's contract (Kang has a 4yr/$11m deal).

The likely reason for the Twins being able to get Park on a four-year deal for just an average annual value of $3 million comes down to leverage. While there was rumors floating over the weekend that the Twins offer was lower than what Park had hoped, the Korean star wanted to be here. Despite being surprised by the Twins winning bid, his goal was to make a difference in the major leagues. With the alternative being no big league deal at all, Park likely moved off of his desired figure.

In finalizing the deal, the Twins get a true power threat to pair with Miguel Sano in the middle of their lineup. Considering Park will now take the majority, if not all designated hitter at-bats, the writing could be even more on the wall for Trevor Plouffe. Regardless of how the Twins go about finalizing their roster, Park's home run stroke will be in it.

After launching 50+ homers in Korea a year ago, the expectations should be lowered in the big leagues (check out what to expect from him in 2016 here). While there will be an acclimation process, expecting Park to take to big league pitching, and provide the Twins a 30 home run per year threat is a good bet.

Welcome to Twins Territory Byung Ho Park, we're glad to have you!
Posted by tlschwerz at 12:58 PM