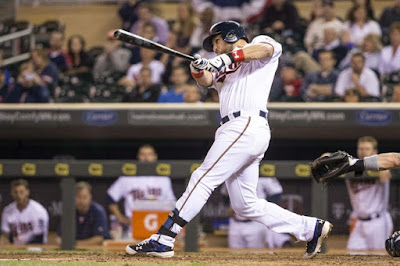 Monday marks a glorious day on the offseason calendar in regards to Major League Baseball. This season in Nashville, the Winter Meetings have officially commenced. With everybody who is anybody in the game of baseball in attendance, the Hot Stove is at its most scalding, and the acquisition market (both free agent and trade) is bubbling over. The question is, what do the Twins do this week?

After offering contracts to each of the six arbitration eligible players, the Twins 40 man roster currently stands at capacity. Don't let that deter focus however, the club has room to improve. With a handful of players that could still be removed from the 40 man, Minnesota has some definite targets this week.

Looking at the biggest area of need for Terry Ryan and Paul Molitor, relief pitching is a glaring weakness. Owning one of the worst bullpens in the big leagues a season ago, you can bet the Twins will be talking to many relievers this week. Off them, two names jump off the page.

First and foremost, Minnesota has been linked to 38 year-old Fernando Rodney. Playing for $7 million with the Mariners and Cubs in 2015, his price will be significantly lowered. Although his 14 games with the Cubs produced a 0.75 ERA, the collective whole was uninspiring. Rodney owned a 4.92 FIP (fielding independent pitching) mark, and a 4.74 ERA in 2015. He struck out just 8.3 per nine while walking 4.2 per nine. In total, it was his worst season since 2011 with the Angels. For all of his detractors, Rodney is a year removed from an All Star season, and Major League leading 48 save campaign in 2014. Minnesota could do worse, but should exercise caution here.

Another arm that the club has been linked to is that of 32 year-old Tony Sipp. A relative average arm for the majority of his career, Sipp put together a 1.99 ERA and 2.9# FIP across 60 games a season ago. His 10.3 K/9 and 2.5 BB/9 would be at the top of the Twins pen. His FIP numbers over the last two seasons suggest 2015 wasn't a fluke, but he's probably not going to repeat the same level of success. Said to be looking for around $5-6 million per year, coming to Minnesota on a two or three year deal would make a lot of sense.

Then there's the trade market, and that's one that the Twins seem to have only one or two logical pieces for. While the farm system is overflowing with top-tier talent, Ryan doesn't seem interested in a package to acquire a high-end player at this point. What he could do is deal from a position of depth.

Trevor Plouffe still remains the most likely player to be traded out of Minnesota. Despite Ryan continuing to claim that Miguel Sano is destined for the outfield, moving Plouffe seems like a much better strategy. The Angels continue to be the team that makes the most sent, and relievers like Cam Bedrosian or Trevor Gott could probably be had in return. Plouffe is no doubt an asset to the Twins, but if they can get a solid relief arm in return, it may push the needle of the club as a whole.

Probably far from likely, but worth mentioning, is the possibility of moving Eddie Rosario. With Minnesota moving Aaron Hicks to the Yankees, it's likely that those around baseball see Rosario as having lesser value. He had a great rookie year, but his free-swinging tendencies provide a reason for caution moving forward. The Twins have Max Kepler on the way, and outfield options at multiple different levels. If they saw a fit in moving Rosario, there's little reason to believe he's untouchable.

Finally, there's always the revisiting of what was rumblings of mutual interest in the San Diego Padres assets. I still have a hard time seeing where Ricky Nolasco fits for the Twins, and a swap to San Diego in exchange for James Shields could make a lot of sense. Both are bad contracts, but Big Game James may be better suited to pitch in the American League than Nolasco has proven. San Diego is motivated to move him, but are the Twins willing to take the bait?

After a fast start to the offseason, I'd put the over/under for moves the Twins make this week at the Winter Meetings at a conservative 1.5. Right now, I'll take the over. I think the team speak probably comes to a head, and Plouffe is dealt. If he isn't this week, it may not happen at all. On top of that, I think Terry Ryan is at least aware he can't go into the season with the bullpen constructed as it currently is. Look for him to address that one way or another.

The baseball landscape is going to be shook up this week, and it's the Winter Meetings that we have to thank for it.
Posted by tlschwerz at 9:39 AM