The Timeline For Big Arrivals 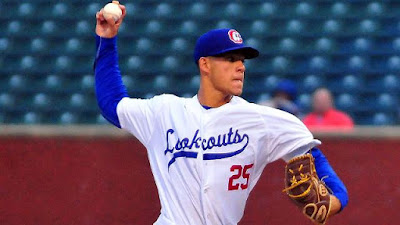 Last season, the Minnesota Twins welcomed the big league debuts of a handful of prospects. From Byron Buxton and Miguel Sano to Alex Meyer and Max Kepler, Target Field saw an influx of prospects. In 2016, the anticipation may not be as high as it was for some of those prospects, but it could arguably carry a bigger impact. With some key roles left unfilled thus far in the offseason, it could be internal options that prove the most valuable.

A year ago, Eddie Rosario was my proverbial pick to click. Way back in March, he was the guy I dubbed 2015's version of Danny Santana the year before. Even before his impressive spring, Rosario seemed like the guy who would get the early callup and take off running. He did just that.

Rosario led the big leagues in triples, he amassed 11 defensive runs saved and picked up 16 outfield assists. While he didn't take walks hardly at all, and swung at what seemed like everything at the plate, Rosario had a very nice first year in the big leagues. Now, Minnesota is ready for a couple of guys to take the torch in the year ahead.

Here's who we should see debut in 2015 based upon their arrival dates:

At this point, there's nothing left for Berrios to prove in the minor leagues. He followed up a 2.77 ERA in 2014 by owning a 2.87 ERA in 2015. His 9.5 career K/9 is much needed in the Twins rotation and while improving at Triple-A, he actually decreased his walk rate (below 2.0 for the first time since Rookie League). During Spring Training, Berrios should get some significant "prove it" type chances with the Twins. I don't think he immediately heads up north with the club, but he should be there within the first month and a half. Expect him to get at least 20 starts for the Twins in the year ahead.

Few areas on the Twins roster are more up in the air than the bullpen. Last season, it was the Achilles Heel of the team, and fixing it remains a priority in the year ahead. Rogers is one of the most immediate internal options. Although he has worked almost exclusively as a starter in his four MiLB seasons, he projects as a nice left-handed long relief option. Rogers doesn't strike out a ton of batters, but he also limits damage. He followed up a 3.98 ERA at Triple-A Rochester in 2015 with an impressive 2.88 ERA in the Arizona Fall League. When the Twins need to call on someone to work relief innings long term early in the season, it should be Rogers name that is called.

Something about a bullpen that features Glen Perkins, Kevin Jepsen, Trevor May, and Burdi sounds extremely enticing. Maybe it's that the fourth name mentioned there throws absolute gas. Burdi would become the first Twins pitcher in a while to register triple digits, and he strikes out batters often along the way. In 2015, Burdi ran into some trouble with walks and took his lumps with a demotion. He responded strong in the Arizona Fall League however owning a 12.4 K/9 while walking just 1.1 per nine. A fast start between Double-A Chattanooga and Triple-A Rochester should have him to the big leagues in early summer.

Pitching for the first time since 2012, Chargois finally turned in a healthy season in 2015. He owned a 2.62 ERA in 48.0 IP split between High-A Fort Myers and Double-A Chattanooga. Chargois is a hard thrower as well, and registered a 9.9 K/9 last season. His walk rate (4.7 BB/9) could use some work, but he'll be moved aggressively in the season ahead. Now 25, I would expect to Chargois to get time at Triple-A Rochester before being a middle-of-the-summer option for the Twins. He's another arm that should elevate the overall ability of the Twins pen.

Bullpens are generally a fickle thing, as is pitching in general. Knowing that the Twins will experience some turnover this season, it's comforting to note all of the strong internal options. Reed likely rounds out the list of top tier pen types. Like Burdi, Reed struggled at points in 2015 but ended on a strong note. He turned in a 1.69 ERA in the fall league, and sat down batters at an 8.4 K/9 clip. Command is the last piece needing to be focused on for him, but Reed should see his debut mid-summer and be a key cog in an improved Twins bullpen.

Unlike a season ago, hitters making their big league debut for the Twins is somewhat sparse in 2016. With Max Kepler already having made his big league appearance, and Byung Ho Park not being considered a prospect, it's Walker that is the first name on the list. The power for the 24 year-old is no doubt real, he smashed a career high 31 homers a season ago. What is also real, and very scary, is that he strikes out a staggering amount. With 195 strikeouts in 133 games last season, Walker is far from comparisons to Adam Dunn, Mark Reynolds or Chris Carter. None of them struck out at the rate he does in the minor leagues, and Walker could push towards 250 strikeouts at the big league level if something doesn't change. Regardless, a similar power output in the year ahead should give him a September call up. A stronger plate discipline will be needed for him to stick.

Just a bit ago, Major League Baseball held its Rule 5 Draft. The Twins protected lefty Pat Dean from being selected by adding him to the 40 man roster. There's no doubt the club likes him and his 2.82 ERA at Triple-A Rochester in 27 starts last year is a good reason why. Dean is 26 and owns just a 5.3 K/9 in his six professional seasons. He also walks no one however, issuing free passes at a 1.7 BB/9 career rate. He's not going to be a high profile roster addition, but in September, he could get a serious look in a bullpen audition role.

Mason Melotakis- First One Out

This is more speculative than anything, and Melotakis probably has less than a 50% chance of debuting in 2016. He missed all of last season due to injury, but has previously pitched as high as Double-A. Another guy the Twins protected from the Rule 5 Draft, Minnesota sees that Melotakis has some good stuff. In his 16.0 Double-A innings, Mason owned a 2.25 ERA combined with a 9.6 K/9 and a 1.7 BB/9. He's almost guaranteed to start no higher than Double-A, and will need to be eased back in. If he puts together a nice 2016 season though, the Twins could give him a cup of coffee look at the end.

If 2015 was the year of the offensive prospect, 2016 is going to highlight the pitching prowess of the organization. While Berrios should factor into the rotation nicely, it's the bullpen that will see the most use out of the incoming arms. For a team looking for relief help, it couldn't be better timed. Minnesota is in a position to fix one of their most glaring weaknesses with some very capable internal options. After seeing six debuts in 2015, there's eight above, and that excludes Park. Let the youth movement continue.
Posted by tlschwerz at 8:09 AM