The Second Coming Of The M & M Boys 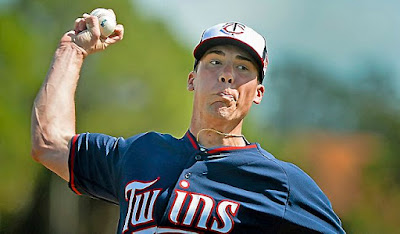 It was the offseason of 2012 and the Twins were coming off another ugly 90 loss campaign. With more uncertainty ahead, the team and organization had to reinvent itself. Getting younger and acquiring more talent was the definite goal. Following that notion, Minnesota dealt one centerfielder, and then another. Both Denard Span and Ben Revere were gone.

Leaving just Aaron Hicks to assume the starting centerfield role, the Twins had some serious questions in the outfield. What they did get however, was two top tier pitching prospects in both Alex Meyer and Trevor May. With front of the rotation type potential there was plenty of excitement surrounding both players, even if the trades were met with criticism.

At this point, neither May nor Meyer is working in a starting role, and while that may be less than ideal, the two could combine to become the Twins second coming of an impressive M & M duo.

Trevor May was one of the Twins best pitchers in 2015, starting or relieving. It just so happened that due to his ability out of the pen, and the Twins need there, he became a much stronger asset in relief. Following a transition to a full time relief role on July 6, May pitched to the tune of a 3.15 ERA and 10.3 K/9 the rest of the way. He also limited damage by walking just 2.1 per nine. In summary, it was May who was at the top of Molitor's trusted relievers list in 2015.

While there's no doubt May could be an asset in the rotation during the 2016 season, it's in the pen that Minnesota needs more help. Having very few strikeout pitchers, May's double-digit strikeout rate and increased velocity in relief should be extremely valuable. Probably best suited for a high-leverage shutdown role, May ceding way to Jepsen or Perkins makes Minnesota late innings leads seem much safer.

Coming full circle on the 2012 outfielder deals is the way in which Alex Meyer figures into the Twins plans going forward.

Meyer was always billed as the higher prospect between May and himself. Once regarded with top of the rotation type stuff, Meyer was seen as a very solid get from the Washington Nationals. Since joining the Twins organization however, his walk rates have only climbed year by year. In 2015, Minnesota moved Meyer to a relief role, a situation that seemed plausible all along.

At 6'9" the lanky Meyer had to learn how to pitch in an entirely different scenario. While there were no doubt hiccups along the way, it's how Meyer ended 2015 that provides the most intrigue. From August 6 through the end of the season, a period of 10 games and 22.2 IP, Meyer was unhittable. The former Kentucky Wildcat owned a 0.79 ERA while striking out 8.9 per nine. His walk rate remained above 4.0 per nine, but he limited opponents to a paltry .192/.293/.205 slash line. Looking at his performance, it's more than fair to argue Meyer deserved a September call up for a second shot at the big leagues.

His snub probably positions him well for the upcoming 2016 season however. Building off of a strong finish, and knowing the club wanted more, Meyer only stands in his own way. Now with the focus being shifted to relieving full time, settling in as one of the highest upside relief options for the Twins is a very real possibility. Meyer has long relief written all over him, and being able to pump his upper 90s fastball past big league hitters is a very real possibility.

Technically, both May and Meyer could be written off a lesser than expected acquisitions should both of them find their long term home in the Twins pen. However, they both may be a part of something so much more by contributing at a high level in relief. While the Twins rotation doesn't have a plethora of quality options, quantity is on their side. Neither of those things can be said about the bullpen, and both Meyer and May could signify the start of that change.

It's often a difficult ask to gauge a prospects contribution at lower levels of the farm. Despite the Twins belief they were getting two quality starters, they may in fact end up with a pair of relievers that lay waste to the American League. Baseball generally has a way of providing some comedy along the way, and rarely are things exactly what they seem. When the Royals traded for James Shields, they ended up with Wade Davis. Minnesota dealt for two young arms, and may cash in on an impressive relief duo that could be dubbed the M & M boys, round two.
Posted by tlschwerz at 7:28 AM